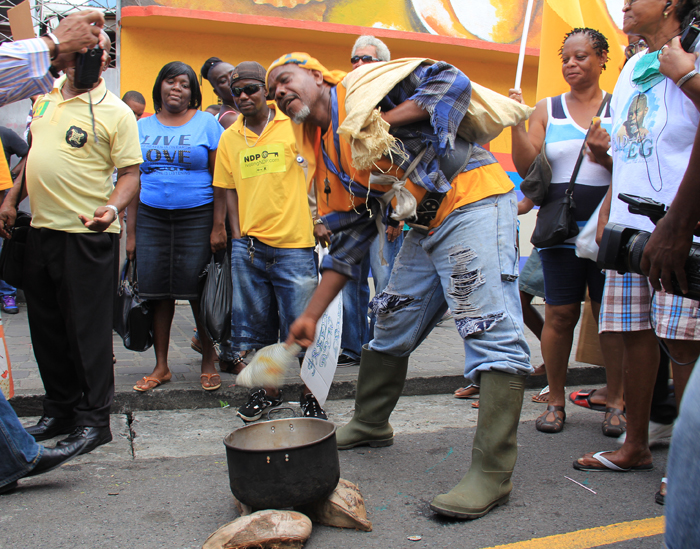 A farmer demonstrates in Kingstown during the NDP’s protest march on July 31, 2014 (IWN photo)

Since the defeat of the New Democratic Party (NDP) in the general elections of March 28, 2001, its leaders, fellow-travellers, and propagandists have, in every post-elections period, been demanding, on a regular basis, fresh general elections. This demand has been invariably accompanied by the mantra “the ULP government can’t last six months”.

Amazingly, and amusingly, this demand and accompanying mantra were loudly screamed even after they lost the 2001 and 2005 general elections by huge majorities of 12 seats to 3 seats! After the general elections of December 2010, which they lost by a one-seat margin, the NDP and its sycophants went into a frenzy. Strangely, they thought that the people had cheated them of what they thought to be a deserving victory. These NDP people are mad!

One recalls that from Dec. 29, 2010, the date on which the House of Assembly first met after the 2010 general elections, the opposition NDP staged protests marches and rallies, in small and progressively dwindling numbers, in Kingstown, almost “every Monday morning” demanding an election re-run. Remember this: The December 2010 general elections, which the ruling Unity Labour Party (ULP) won with a majority of seats and popular votes, were recognised to be “free and fair” by independent observers locally, from CARICOM, and from the Organisation of American States (OAS). Still, the NDP wanted an immediate re-run. Why? Because they lost! But that is not the way of democratic societies either in law or practice!

The NDP continued their post-December 2010 protests marches and rallies until March 28, 2011. On that latter date, the ruling ULP flexed its political muscles in a massive celebratory march and rally in Kingstown to marks its tenth anniversary in office. Nearly 10,000 Vincentians rallied with the ULP that day, as against the paltry 200 or less persons who were to have been found in the NDP’s mis-directed efforts.

In the aftermath of the general elections, too, the NDP opened up a legal front in its effort to unseat the ULP government and vitiate the people’s democratic verdict. To this end, several NDP candidates from those elections filed private criminal complaints against ULP leaders, namely, Douglas Slater, Clayton Burgin, Ces Mc Kie, and Ralph Gonsalves — “the ULP Four”. Comrades Clayton, Ces, and Ralph had won their seats handsomely; Douglas Slater had not even contested a seat. All these private criminal complaints were purportedly made under the Representation of the People Act. The NDP’s intended prized scalp was, of course, Comrade Ralph. The criminal charge against him, if successful, would have meant Comrade Ralph’s loos of his seat which he won with 83 percent of the vote, a ban on his electoral candidacy for five years, and a possible jail term. It would have meant, too, a fall of the ULP government if the nefarious legal efforts of the NDP proved successful.

One by one the private criminal charges against “the ULP Four” fell apart legally. In the case against Comrade Ralph, the Chief Magistrate refused to sign the complaint on the ground that it was “frivolous, vexatious, and an abuse of the process of the Court.” The complainant, Vynette Frederick, felt so aggrieved by the decision of the Chief Magistrate that she launched a review/appeal process on the matter in the High Court. The upshot of all this was that Frederick was admonished by the Court of Appeal for lying against Ralph in an affidavit before the High Court in the matter. Dissatisfied with the Court of Appeal’s decision in favour of the Chief Magistrate, and against her, Frederick appealed to the Privy Council. The Privy Council peremptorily dismissed Frederick’s leave to appeal further. Arising from this Vynette Frderick-initiated legal action are criminal charges against her brought by the Director of Public Prosecutions (DPP) touching upon “perjury” and “fabricating evidence with intent to deceive the Court”. Frederick awaits her day in the Criminal Courts, clothed, as she and all Defendants are, with the presumption of innocence.

As the Carnival season 2014 approached, NDP activist and calypsonian, “Patches” Knights, delivered himself of a trite, partisan political commentary of very little merit lyrically or musically, entitled “Ring the Bell Comrade, Ring the Bell”. In the NDP’s echo chamber of NICE Radio, this calypso was promoted as a “masterpiece” upon which the Comrade’s political demise could be hastened. NICE Radio in tandem with the “internet crazies” worked themselves into this make-believe world of imminent political victory. Eustace and the others in the NDP leadership, leading as always from behind, fell in line.

Thus, a forgettable calypso, of little intrinsic creative merit, had, foolishly, become for the NDP a political strategy for Ralph’s imminent removal from office. So, armed with a cheque of US $25,000 from a Mustique home-owner “to promote competitive democracy”, the NDP proceeded to hold “Ring the Bell” public meetings across St. Vincent and the Grenadines and to propagandise on the subject on NICE Radio and social media. This campaign ensued for some eight weeks (June and July) and was scheduled to reach its high point in a protest march and rally on Thursday, July 31, 2014.

This march and rally were duly held. They were most underwhelming. Less than 200 persons turned out to support the NDP folly. The funeral of EG Lynch, which intervened on July 19th, had become an additional burden for the NDP to bear because of their unruly behaviour at the funeral and their unseemly, absurd justifications afterwards. The “Ring the Bell” campaign had failed!

As Comrade Ralph has aptly said: “The NDP came to town to ring the bell, but the bell tongue drop out; not enough people to hold it in.”

It is now over one month since the “Ring the Bell” march and rally on July 31st. The NDP has behaved since then as though the event did not take place; they do not refer to it; they are clearly embarrassed, politically, by it. The bell tongue has dropped out! The NDP has just moved on to other things; other silly propaganda stunts and political rubbish.

Meanwhile, Comrade Ralph and his government are continuing the consolidation of their developmental work on behalf of the people and launching fresh, quality initiatives in a number of areas, including: the economy, education, health, housing, public finance, physical infrastructure, social development, foreign policy, and sports. Further, in reorganising his government, Comrade Ralph is sharpening the focus for better delivery, all-round. The work of the government and the ULP have put the NDP further on the defensive. The NDP is at a lower political ebb than in 2010; it is much weaker than then.

Now that the Comrade has removed Julian Francis as Minister of Transport and Works and our dear General Secretary has reinvigorated his activism on the ground, the NDP interprets all this as a signal that general elections are around the corner. All of a sudden the NDP is running scared. They were clamouring for the bell to be rung; they even went into a funeral service and rang the bell. But as Ralph, in an invocation of John Donne, had warned them: “Ask not for whom the bell tolls; it tolls for thee”.

Indeed, all along, Comrade Ralph has been insisting that Eustace and “Patches” Knights can ring bell as entertainment; so, too could Julian in a calypso tent. But the only man truly authorised to “ring the bell” is the Comrade. That was so then; and it is so now!

Amusingly, I hear some NDP sycophants prattle that no Prime Minister should have the power to advise on the dissolution of Parliament and the calling of general elections at any time he pleases. Well, well; these people do have short memories! In November 2009, Comrade Ralph proposed in the new Constitution that no dissolution of Parliament and no holding elections should take place earlier than three months before the expiration of the five-year term since the last elections. The NDP opposed this and called for a “No” vote in the 2009 referendum. Ralph wanted to surrender the power to call a snap election but the NDP said: “Keep it”.

The NDP is now in a state of panic. They have lost their political nerve; they are on the way to a massive election defeat! And Julian, relieved of his ministerial posting, is at large, on the ground, putting the ULP’s election machinery in place. Ralph, meanwhile, is playing political “cat and mouse” with the NDP. Eustace has no political adviser of worth at hand to help him out. He has isolated himself from the likes of Sir James, PR Campbell, and Jerry Scott. He relies now on people like Vynette Frederick, Brian Alexander, Dougie De Freitas, Luzette King and the “internet crazies”. No wonder Eustace and the NDP are lost, and increasingly at sea!