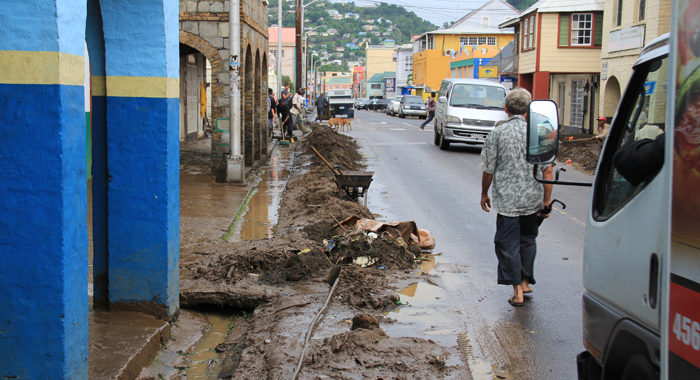 Prime Minister Ralph Gonsalves is satisfied that the system worked after the floods and landslides on Saturday, although the nation’s disaster management director and his deputy were out of the country.

Head of the National Emergency Management Organisation (NEMO), Howie Prince, was in Grenada on official duties, and his deputy, Michelle Forbes, is in Taiwan for further training.

Torrential rains from a low-level trough system early Saturday morning triggered flash floods and landslides in some parts of the country, and left damage to homes and public infrastructure.

Gonsalves, who is head of the NEMO Council, told a press conference on Tuesday that all systems were mobilised as soon as morning broke Saturday.

He said he was in contact with Chief Engineer Brent Bailey, Minister of State in the Ministry of Works, Sen. Julian Francis, Permanent Secretary in the Ministry of National Security, Godfred Pompey, Deputy Prime Minister Girlyn Miguel, and Prince, who was stranded in Barbados en route to St. Vincent as a result of the weather, which flooded the E.T. Joshua Airport.

“I know that some persons, I understand, posted on some news item or on the media that how you can have Howie and Miss Forbes out at the same time, and they were saying that Howie is on holidays. Well, in fact, Howie is not on holidays. I, in fact, take responsibility for sending him to Grenada for one day,” Gonsalves said.

Prince was in Grenada attending an event to commemorate the 10-year anniversary of Hurricane Ivan.

“And Michelle Forbes, I approved for Michelle to go to Taiwan to strengthen her own capacity, which would redound to her own advantage of NEMO and disaster preparedness, because there are always new things to be learning and how to improve on what we are doing,” Gonsalves said.

“And, I would say this, as soon as I knew that Howie had not gotten back and he in fact had called me, and he was in touch with Julian (Sen. Francis), too, … I got in touch with the next person in line, Holda Peters.”

Peters, NEMO’s training officer, was in charge of the agency while the director and deputy were overseas.

“And you know, its amusing, some persons who would be in St. Vincent sitting down and talking, they wouldn’t necessarily try to help,” Gonsalves said.

“Holda was taking a minibus from Park Hill to come into town to man NEMO. I was in touch with the Commissioner of Police. All the systems were mobilised.

“We don’t have to rely on one person to mobilise the systems,” Gonsalves said, noting that he gave an update on the state-owned NBC Radio on the impact of the storm   around 1:30 p.m. Saturday.

“Because what you really need in time like these is to hear the voice of the Prime Minister, assuring you, listen we have things under control…

Related: Complaints about dust in Kingstown after floods

Gonsalves congratulated the persons who volunteered after the floods.

He said that Francis and the technical persons in the Ministry of Works said that if the ministry had not done a lot of the river training, “albeit rudimentary river training” in both the Buccament River and also the Cumberland River, there would have been more serious damage taking place.

“So that work was being done on an on-going basis,” Gonsalves said.

He said that in some areas, the banks of the rivers were breached, and Francis spent Sunday in Buccament Bay helping with the clean up.

Heaps of sand from the flood were still on the side of the road in Kingstown on Wednesday, and on Monday evening, firefighters were hosing down the town. Vendors had earlier Monday complained about the city not being hosed down after the storm.