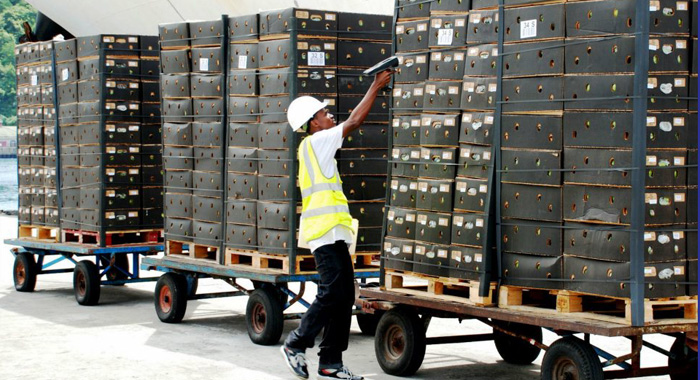 There is increased demand on the regional market for Vincentian bananas, but farmers are having a difficult time supplying the fruit.

“There is an increased demand for bananas from St. Vincent and the Grenadines on the Barbados and the Trinidad and Tobago markets. We have not been able to meet the demand and this is definitely an encouraging sign for farmers who are into banana production to increase their acreages. And the government is going to, in the next month, receive 100,000 banana plantlets from Israel, which would allow us to cultivate 142 acres of bananas,” Minister of Agriculture Saboto Caesar told a press conference last week.

He further said he has received a correspondence from a purchaser in Barbados, who is willing to pay up to $20 per box of bananas.

“… the quantities that were received traditionally into Barbados and Trinidad and Tobago from Central America and from the Dominican Republic is significantly reduced because of the negative impact that black sigatoka is having on banana production in Central America,” he said.

“Of course, this is good news for our banana farmers and when I analyse the statistics of the take-up of the tissue culture banana plantlets from Orange Hill, we see a significant increase …” Caesar said.

He told the media that a critical part of agricultural thrust in St. Vincent and the Grenadines “embodies the idea of diversification around and with banana”.

Caesar said that when his Ministry assesses “what has happened and what has happened in the Windwards, and we fully appreciate the fact that the banana industry has been significantly impacted in a very negative way by diseases and by the impacts of climate change, it is critical that we have a well-planned, structured and conceived diversification programme.”

The local banana sector was dealt a significant blow a few years ago, when the Ministry of Agriculture, then under the leadership of Montgomery Daniel, failed to spray against black sigatoka, even as the disease ran amok in St. Vincent.