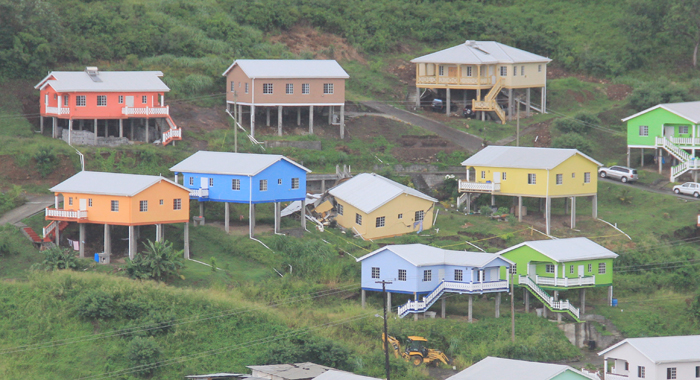 Homeowners at the Clare Valley housing project, where the house collapsed on Friday, have appointed a committee to represent them in their interactions with the government.

The committee was appointed at a meeting on Saturday, attended by some 22 homeowners and Unity Labour Party candidate for South Leeward, Sen. Jomo Thomas, who told I-Witness News that the problems at the housing project are real and “cry out for serious attention”.

One homeowner who attended the meeting, but asked not to be identified, told I-Witness News that the committee is made up of Donnie Collins, Rafique Jackson, Sean Brewster, Kevin Young, Nigel Blake, and Bridgette Francois.

The homeowner said the committee was mandated to write to the state-owned Housing and Land Development Corporation (HLDC), which constructed the houses, and copy the letter to the Ministries of   Finance and Housing, Area Representative, opposition MP Nigel Stephenson, and the media.

Homeowners are demanding that the HLDC construct proper drains in the area, and reinforce the columns on which many of the houses stand.

Prime Minister Ralph Gonsalves said on Monday that preliminary findings show the three-bedroom concrete house, belonging to physician Katisha Douglas, collapsed because of poor drainage, poor engineering, and the type of soil in the area.

Douglas told reporters on Saturday that she had complained to HLDC two months ago that the house, which was built 30 months ago, was shaking.

Meanwhile, Thomas a lawyer who became a senator for the ruling ULP last September, told I-Witness News on Tuesday that homeowners at Sunday’s meeting were “angry, they were anguished.

“They talked about the numerous complaints they had made to the authorities, the principals of the Housing and land Development Corporation, and, in their words, the scant regard which was given to many of their complaints,” Thomas said.

Thomas said that homeowners are asking for meet with the HLDC at the Clare Valley Community Centre “to further hear their views and for HLDC to tell them what they intend to do to respond to the pressing concerns”.

He said he had known about some of the homeowners’ concerns having made representation on their behalf to the HLDC even he became a senator.

“There’s a chronic problem as it relates to drainage, the problems relating to popping tiles — the tiles were popping off the floor – there are problems in a number of homes relating to shaky structures, where people say when they are in their home they can feel their home shaking,” he further said.

“The problems are real. They cry out for serious attention. In fact, the last representation I made for a police officer who lives down there, I remember making the point that this was a catastrophe waiting to happen and it demanded urgent attention,” Thomas said.

“Homeowners’ concerns were coming to me even before the former CEO Morris Slater died,” Thomas said.

Thomas said he did not organise the meeting, but was invited to attend it.

He said he believes he was invited because he had made representation for homeowner, and because he is the ULP’s candidate and caretaker for South Leeward, where Clare Valley is located.

The government has said that it will pay to rebuild the house that collapsed and will finance the remedial work on all the houses that may be found to have structural issues.