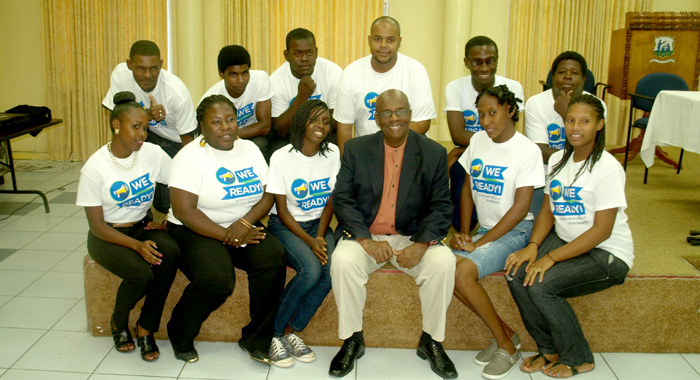 President of the NDP, Arnhim Eustace pose with Young Democrats after the launch of the app. (IWN Photo)

The opposition New Democratic Party (NDP) on Wednesday launched “a ground-breaking”  web application to help voters’ register for the next general elections, constitutionally due in December 2015.

The app, which was developed by the Young Democrats, the party’s youth arm, forms part of the NDP’s “We Ready” campaign. It includes information about voter registration times and venues and the NDP’s candidates.

It also asks persons to choose their most important issues for the next general elections and offer feedback on how other persons think about those specific issues.

“The app is dynamic, interactive and informative and easy to use and ready for a generation of young people who have grown up in a world that is different from that of most adults. Many of us rely on technology not just to keep in touch, but as a way of developing our identities, socializing, and belonging to groups,” President of the Young Democrats, Nick Francis, said at the launch in Kingstown.

“Political engagement through the web and blogs are but a few examples of how we as young people actively engage in civic society through information and communication technology,” Francis said.

“The New Democratic Party is serious about youth development and engaging young people where they meet and converse online and is dedicated to making information and communication technology work for young people by ensuring that it plays a positive, productive and creative part of our activities, development and social participation,” he further stated.

President of the NDP, Opposition Leader Arnhim Eustace, noted that the app was developed by the Young Democrats.

“The idea was conceived that the young people wanted to get the word out to their friends, that voting is important, and indeed critical if we want to see change in this country, so, with the assistance of local technologists and developers and our Media Relations Department within the party led by Sen. Vynnette Frederick, this mobile app was created,” Eustace said.

The app was designed by Herbert A. Samuel, an industrial engineer who developed the award-winning Welectricity application, which help homeowners track and reduce energy consumption.

“This is a youth-driven idea. This is for the mobile smartphone and tablet device generation. Those who populate and get their information on social forums like Facebook and Twitter. … This app is designed to mobilize them. This is where and how our young people communicate. WE don’t call them Internet crazy — we call them Internet savvy and we embrace the opportunity to join the conversation where they are comfortable. That conversation is online and on mobile,” Eustace said.

Prime Minister Ralph Gonsalves has dubbed “Internet crazies” persons who use the Internet to criticize his government.

The app is targeted at smartphone and tablet users.

“The app features a clean, modern and user-friendly design, full Facebook and Twitter integration and smartphone wallpapers and ringtones for download and is the first of its kind to be launched in the sub-region, the NDP said in a press statement.

“The app is considered by the NDP to be a vital aspect of their new media outreach, an innovation in the current election campaign cycle,” the party also said.

And, Sen. Vynnette Frederick, the NDP’s spokesperson and shadow minister of science and technology, said the party has always been “committed to the idea that the positive use of technology must become a way of life for our citizens.

“Our Vision for information and communication technologies for St. Vincent and the Grenadines is for our country to boast a wealthy digital society and economy and number one digital destination — the place of choice to connect, communicate, collaborate and co-create. The NDP is ready to create a wealthy, competitive society and economy through strategic human and infrastructure investments within a thoroughly enabling environment in collaboration with world-class partners,” she said.