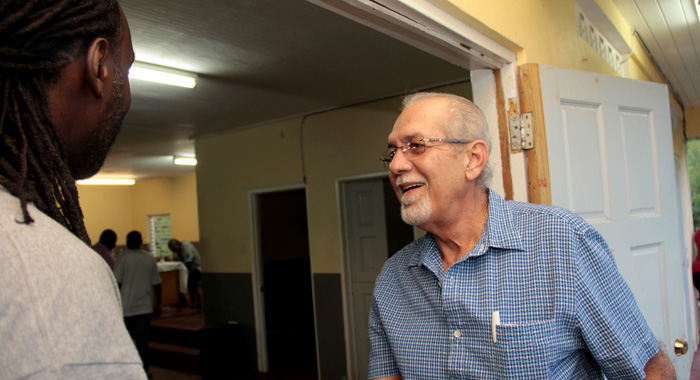 Sen. Julian Francis, right, is greeted by homeowner Donnie Collins as he arrives at the meeting on Saturday. (IWN photo)

Did deceased former head of the Housing and Land Development Corporation (HLDC), Morris Slater flout government policy as it relates to the construction of houses under the government’s housing project in Clare Valley?

Sen. Julian Francis, who was Minister of Housing when the HLDC, under the management of Slater, built the houses (one of which have since collapsed, while there are many questions about the structural integrity of others) told homeowners on Saturday that the Clare Valley project departed from the standard set at the other projects across the country.

There are no drains between many of the houses, and, among many other complaints, residents have spoken about the poor drainage in the area.

But Sen. Francis, who is now Minister of State in the Ministry of Works, while noting that Slater, (who died in January 2013) was both an architect and engineer, said the former HLDC head had his style of doing things, and did them that way, regardless… (See video below)

2 replies on “Dead man a scapegoat for collapsed house? (+Video)”