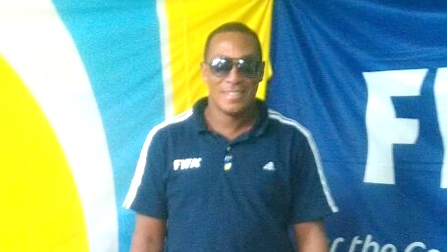 Another Vincentian is part of an important element in the thrust by FIFA/CONCACAF to move the game of soccer forward in a purified way.

Three weeks after referee Clemroy “Bert” Francois was elevated to the FIFA Elite panel of Assessors for the CONCACAF Region, Dominic Stowe Single Point of Contact (SPOC) for football in St Vincent and the Grenadines, Dominique Stowe is part of an intensive initial one-week training at the Interpol/FIFA Diversity Integrity Workshop in Miami.

Stowe, a military professional and a committee member of the St Vincent and the Grenadines Football Federation (SVGFF), was appointed in June by CONCACAF in what is seen as a sensitive and critical position to combat, among other things, match fixing.

In June, the Confederation of North, Central America and the Caribbean Association Football (CONCACAF) announced the beginning of the process of appointments for Single Point of Contacts (SPOC) in every member association, a CONCACAF release said.

The release also said “these individuals will assist the Confederation in extending the efficient and effective regional integrity network aimed at protecting the game of football by combatting match-manipulation, racism and discrimination”.

“Match-fixing is a cross border epidemic,” said CONCACAF President Jeffrey Webb. “Appointing the SPOC’s is an essential step to establish an integrity network within CONCACAF. Through that network we will be able to integrate all regional measures and coordinate operations in the MAs and provide them with support in order to prevent, detect, investigate, and immediately respond to match manipulation issues,” Webb was quoted as saying.

According to the CONCACAF, as it pertains to the fight against match-manipulation, the SPOCs will also be the contact persons in establishing the CONCACAF Integrity program at the member association level.

It pointed out that the current CONCACAF Integrity programme contains different education and prevention measures. The presence of one dedicated contact in each country will facilitate the fast and smooth exchange of information across the region.

The creation of such a position in every Member Association is also recommended by FIFA.

“FIFA established 2012 an Integrity Initiative to fight match manipulation. The entire football community needs to be united and committed in the response to the worldwide threat of corruption and organised crime. In order to build up a global (communication/information) network FIFA is recommending that each football association establishes a contact person (SPOC) to coordinate all matters related to match manipulation as a national level,” Ralf Mutschke, FIFA Director of Security Division said back then.

According to the CONCACAF release, SPOC will receive special tailored training in fact finding by FIFA and INTERPOL to develop the knowledge and skills to conduct an effective enquiry and establish the facts relating to a report or suspicion of match manipulation as well as presenting the findings for the purposes of disciplinary proceedings.

When first selected Stowe said he felt honoured to be so identified to undertake such a critical role, but was cognisant of the possible dangers which the responsibility would attract.

The issue of match-fixing is being seen by FIFA and as one the major threats to the integrity of the sport.

Last year, CONCACAF was forced to conduct cursory investigations into the SVGFF following claims by a former executive member of the practice of match-fixing.

Reports say that the investigations were found to be baseless.