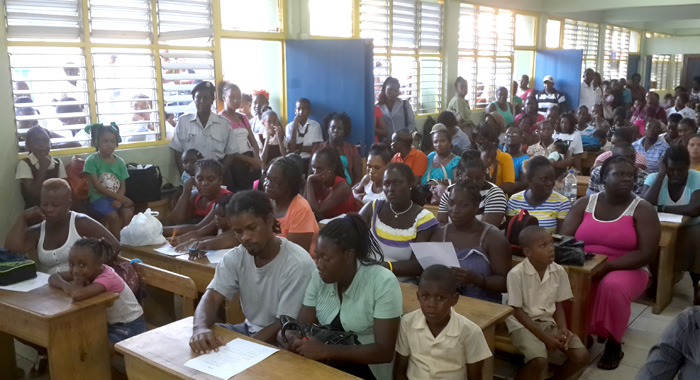 The meeting agreed that the school be relocated to the Glove Factory building in Kingstown.

The government has reached agreement with parents and staff on the temporary relocation of the students of the Kingstown Government School.

The Ministry of Education and school officials met with parents, past students, community leaders, and teachers last week at the school.

The consultation was also attended by representatives of the National Emergency Management Organisation (NEMO), the Central Planning Division (CPD) and the Roads, Buildings and General Services Authority (BRAGSA).

Michelle Forbes, deputy director of NEMO, explained to the packed hall that her organisation is continuing the process of increasing emergency shelter capacity throughout the country.

She further said that Kingstown was in need of an additional shelter, hence the proposed works at the school.

CPD’s project coordinator for the Regional Disaster Vulnerability Reduction Project (RDVRP), Richard MacLeish, said that the school was assessed earlier this year by an overseas consulting firm for its structural integrity and the next phase, a design consultancy, will begin shortly.

MacLeish also advised the gathering that construction was not likely to begin until July 2015, and would last for about eight months. MacLeish added that drainage, hurricane resistant windows, ease of access for the disabled, and gender specific bathrooms were areas under consideration.

Permanent Secretary in the Ministry of Education, Nicole Bonadie-Baker advised the stakeholders that relocation of the students and faculty to the former Glove Factory building, now occupied by the Kingstown Anglican Primary School, was the planned option along with an additional facility that would be erected in the immediate vicinity of the Glove Factory.

Bonadie-Baker also advised that works are planned for the Anglican School Annex, to which the approximately 200 students, who now occupy the Glove Factory building, would return.

She further said that the completion of the Anglican School repairs is a critical factor in the temporary relocation of the operations of the Kingstown Government School.

Franklyn Browne of BRAGSA, indicated that his organisation was completing estimates for the remedial works at the Glove Factory building to fully house the student population from Kingstown Government, inclusive of an additional building that would provide additional classrooms and other facilities.

At the conclusion of the meeting, the stakeholders unanimously agreed to the relocation of the students during construction and expressed their thanks for the planned rehabilitative work to the school, which would be completed ahead of the commencement of the September 2016-2017 academic year.

The EC$165.4 million SVG RDVRP was declared effective by the World Bank on September 9, 2011, and is being implemented over a seven (7) year period that ends on December 31, 2018. It is 100 per cent financed by a credit of US$46.52 million from the International Development Agency, a Strategic Climate Fund Pilot Programme for Climate Resilience grant of US$12 million, and a Strategic Climate Fund Loan of US$3 million. The RDVRP is supporting SVG’s efforts to prevent and adapt to the effects of climate change, strengthen hazard and risk evaluation, and improve decision-making.

The project is being implemented by the Public Sector Investment Programme Management Unit of the Central Planning Division.