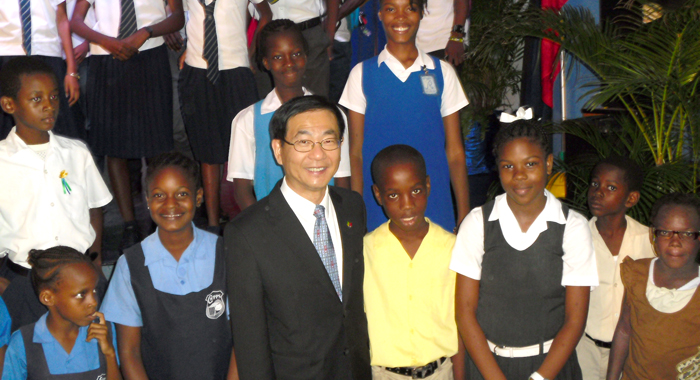 Taiwan Ambassador Baushuan Ger poses with some of the scholarship recipients.

The scholarships were presented during a ceremony at the Peace Memorial Hall in Kingstown.

Ger told the ceremony that since 1998 Taiwan has been providing scholarship in the amount of US$100,000 every year to hundreds of students from primary, secondary, and post-secondary schools. So far, thousands of students have benefited from the scholarship programme.

He said the programme is a well-implemented one that has helped students to complete their education, fly high and make contributions to the country.

The ambassador pointed out that since SVG and Taiwan are both island economies with limited natural resources, the only way for development and success is education.

He said education is therefore one of the priorities for the bilateral cooperation.

To ensure the continuation of the scholarship, a Kingstown-Taipei memorandum of understanding, on which the scholarship is based, has been renewed for another five years — from 2014 to 2018.

Besides the scholarship presented this week, Taiwan also provides higher education scholarship to Vincentian, which has seen over 100 nationals awarded scholarships to study in Taiwan. About half of these scholarship recipients have completed their degrees and returned to serve the SVG with knowledge obtained in Taiwan.

Minister of Education Girlyn Miguel expressed gratitude to the Government of Taiwan for all the assistance in infrastructure, agriculture, education and human resources development and other areas during the 30-plus years since the establishment of diplomatic ties.

She said that the Government and people of SVG are deeply grateful to Taiwan for its generosity.

The Education Minister lauded the Government of Taiwan for its foresight to invest in education, which has played a key role in its national development adding that this is a model for SVG.

Miguel also encouraged the recipients to make the best use of the scholarship, study hard, and complete their education.