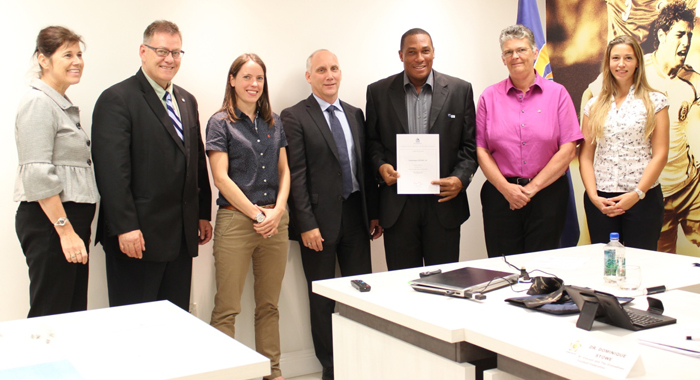 Dominic Stowe poses with his certificate and facilitators after the training in Miami.

St. Vincent and the Grenadines’ Dominic Stowe is now back home, set to put together plans to begin his efforts to sanitise the game of soccer.

Stowe was among participants from the region who attended the first-ever Interpol/FIFA training course specifically for Single Point of Contacts (SPOC) in CONCACAF at CONCACAF’s Miami headquarters.

A release issued after the course said that representatives from Interpol and FIFA conducted the intensive four-day workshop for 11 SPOCs from each of CONCACAF’s three regions, among them the first three female participants.

The release said the course was developed to prepare fully persons tasked with establishing the facts in relation to reports or suspicions of match fixing/match manipulation within national associations and confederations. The release said the course is done to educating SPOCs on how to plan and conduct an appropriate inquiry, as well as present results to a disciplinary body.

It added that the course is a key element in an overall strategy to combat increasing reports of match manipulation. This way, coordinated steps can be implemented for an effective.

SPOCs will liaise with the CONCACAF Sports Integrity Department regarding all integrity issues, in particular to receive and exchange general information relative to current threats and to inform CONCACAF about pending procedures, the release said.

Among the main responsibilities of the SPOCS are: conducting inquiries and/or investigations as a “fact finder” for or in close cooperation with the judicial body of his/her member association; liaising with the relevant national authorities, such as police and prosecuting authorities by submitting and exchanging and coordinating investigations; linking with FIFA security in regard to integrity issues; initiating, establishing and maintaining integrity initiatives and education/prevention programmes to combat match manipulation within member associations in coordination with CONCACAF; coordinating with the CONCACAF Integrity Department so that the Confederation’s education/prevention programmes are implemented within member associations.

Laila Mintas, CONCACAF Director of Sports Integrity informed the participants that their role was very important in the fight to cleanse the sport.

“Appointing the SPOCs was a first very essential step in order to build an efficient network within CONCACAF,” he said.

“Training these people for their important task is the next significant step in our fight against match manipulations in our region… Having received this special tailored training, our SPOCs are prepared for their new positions,” he added.

The release said that as an additional component of CONCACAF’s efforts to broaden its Embrace Diversity campaign, these qualified individuals will help coordinate the monitoring and elimination of any racist or discriminatory behaviour during matches. They will also be responsibility for establishing diversity initiatives.

The course held in CONCACAF was the second conducted by Interpol/FIFA worldwide. UEFA hosted the inaugural one in April.