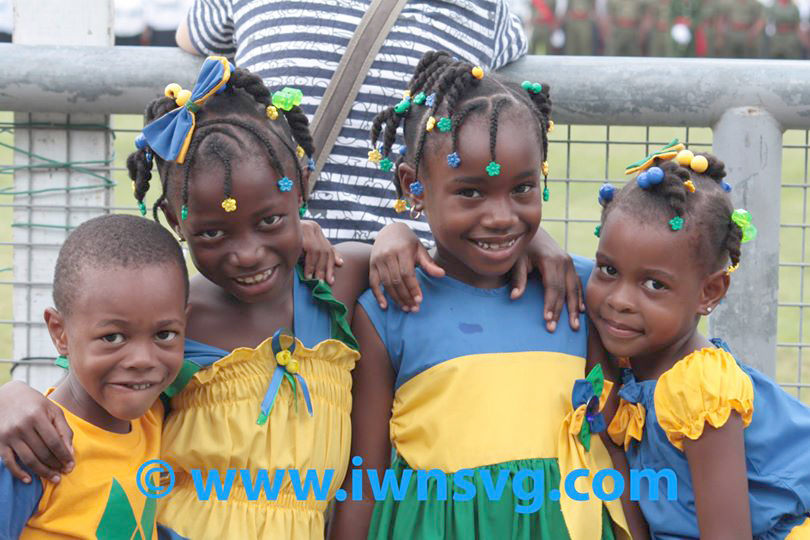 Children wear national colours at the 2013 Independence parade. The leaders of SVGs main political parties have shared their views on what the future holds for Vincentians. (IWN photo)

St. Vincent and the Grenadines (SVG) is today (Monday) celebrating 35 years of political independence from Britian with the government saying much progress has been made since the devastating trough system last December, while Opposition Leader Arnhim Eustace’s Independence message was written as if he were addressing the nation in 2019 as prime minister.

Eustace suggested that there is nothing to celebrate this Independence, as he wished the nation “Happy 40th Independence”.

“How honoured am I to address my fellow citizens this 27th October, 2019, our 40th year of Independence from Great Britain!” he said at the beginning of the message.

“Our lows of the 2001-2014 period have been humiliating: We nosedived from consistent economic growth in the 1980s and 1990s and an IMF rating of ‘much to praise little to fault’ to 3 years of negative economic growth and low growth in the years 2008 to 2014 and a reputation as the regional begging bowl,” he said.

The statement suggested that the Ralph Gonsalves Unity Labour Party (ULP) government, which came to office in March 2001, after 16 years of NDP governance, will lose the next general elections, constitutionally due in December 2015.

“Now on our 40th anniversary of Independence this 27th day of October 2019, we are cautiously optimistic and determined to recover and to grow. In the 2015–2019 period, we have seen the signs of social, economic and political renewal. Since the NDP victory at the polls in 2015, government has set about the business of governing and not politicking. There is no NDP Government, just government, plain and simple. The civil service is run more efficiently and with improved morale as civil servants and the general public observe the promotion of Vincentians of all political stripes to high-level government positions on the sole basis of merit,” Eustace said.

“The government is aggressively repaying its private sector debt. Since 2015, our diaspora no longer simply sends remittances to their families but is actively involved in trade and investment in the Vincentian economy,” Eustace said in the message.

“Following the prosecutions of several corrupt government officials in the post-election 2015-2016 period, graft and corruption have fallen to record lows. Some of the public’s faith in the judicial system and the protection of their right to freedom of expression has been restored. Our calypsonians belt out commentary with abandon. The tenders board operates transparently. For the past four years, farmers have been realizing profits for the first time since 2010, and there are now the beginnings of an exodus of nationals from unemployment to self-employment as farmers. And, with the operation of the large-scale primary and secondary schools book loan scheme, student enrolment and attendance are up,” Eustace said.

But while Eustace spoke in futuristic terms, Gonsalves, in his Independence message, also published in the media on the weekend, said that in the last five years, SVG has been struck hard by five major adverse climate events: Hurricane Tomas in October 2010, the April Floods of 2011, the Christmas Eve disaster of 2013, and two prolonged droughts in the first five months of 2010 and 2014.

Gonsalves, who is also Minister of Finance, said these natural disasters caused loss and damage amounting to EC$600 million or one-third of the country’s gross domestic product.

The Christmas-eve disaster alone amounted to $330 million or 17 per cent of GDP, he said of the trough system, which also claimed 12 lives.

“Over the last ten months since the Christmas-eve disaster, our people and their government have responded admirably to rebuild the lives and material conditions of families, communities, and the nation. In this process, we have been accorded prompt, and on-going assistance, from friendly governments and institutions regionally, in our hemisphere, and internationally. We thank them from the bottom of our hearts. In our profound gratitude, we assert that we are not, as yet, out of the proverbial woods. There is much work to be done in the enterprise of relief, rehabilitation, and sustained recovery,” Gonsalves said.

He further told nationals that despite all the challenges and difficulties facing the country, there has been economic recovery, “slowly but surely”.

Since 2011, positive economic growth has been recorded for every year,” he said, adding that the aggregate real economic growth in St. Vincent and the Grenadines has increased by 4.9 per cent for the three-year period 2011-2013, inclusive.

“This improvement has just about edged ahead of the aggregate decline in the economy for the three-year period 2008 to 2010, inclusive. Still, the economic recovery is too slow, and uneven, to absorb an acceptable level of new entrants to the labour market while maintaining the existing workers at their jobs, particularly in the private sector,” he said.

Gonsalves said employees in the public sector have not been laid off as a consequence of any economic or fiscal challenge, adding that there are special employment programmes for public works and for university and Community College graduates.

“There have been, too, no spending cuts in critical areas such as health, education, housing, national security, and agriculture. We have been both enterprising and prudent as all the circumstances demand,” Gonsalves said.

Meanwhile, Ivan O’Neal, leader of the Green Party, which gained less than 1 per cent of the votes in the 2010 general elections, said that “35 years since the promise of independence was realised, [SVG] still fails under an inept government.

“The 27th October 1979 was meant to be the start of independence, but rather than cut the umbilical cord of dependence to the UK, successive SVG governments, including the ULP regime, have just hooked up additional umbilical cords to other richer nations. The slave mentality of the ‘begging bowl’ approach still exists,” said O’Neal, who is a former treasurer for the ULP.

“Our country is in a mess and after 13 years in office, the ULP regime still fails many thousands of Vincentians. Agriculture is in crisis, poverty is increasing, unemployment is high, crime is out of control, public debt is high, and the education revolution is failing our children. This is no plan for independence,” O’Neal said.

He called for the resignation of Gonsalves, saying that the Prime Minister and Minister of Finance “has been utterly hopeless in managing SVG’s public finances.

He said “long-term, sustainable independence” for SVG will only be achieved when the country has a strong economy.

O’Neal called for severing of diplomatic ties with Taiwan in favour of China. “We must also put high-quality education at the heart of our economy, and build our own science and technology university to educate our people,” he said.

“This will help to boost the economy, create thousands of new jobs, help SVG businesses to prosper, and create the revenue needed to competently manage the socio-economic and financial affairs of our beloved country,” he said.

Anesia Baptiste, leader of the Democratic Republican Party (DRP), which was founded in 2012, said that this independence, Vincentians “ought to celebrate our possession of inalienable rights and freedoms…

“The DRP is cognizant of the challenges we continue to face this independence and we are poised with a PRO-RIGHTS PHILOSOPHY OF GOVERNANCE — REPUBLICANISM — to provide meaningful change for good to our situation,” said Baptiste, who was fired as a senator for the Eustace-led New Democratic Party in 2012.

The main national even for Independence will be a military parade in Kingstown, at which Gonsalves will deliver his address to the nation.