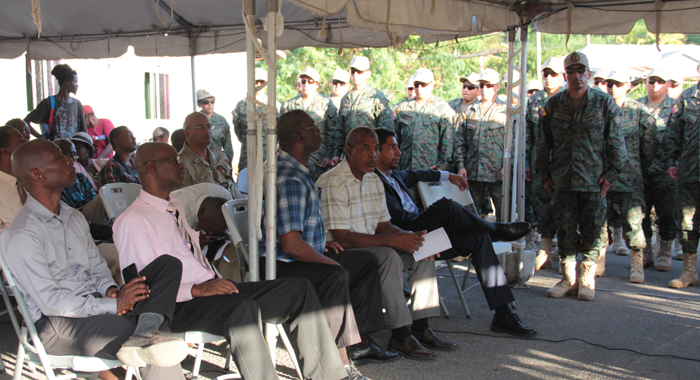 Ecuadorian soldiers and Vincentian government officials at the ceremony on Tuesday. (IWN photo)

Vincentian and Ecuadorian officials have lauded south-south cooperation as Ecuador Army Corps of Engineers prepare to rebuild four bridges that were destroyed by the trough system in St. Vincent last December.

The total cost of the Bailey bridges, one of which will be the nation’s longest, is US$4 million.

This country will provide the Bailey Bridges, while Ecuador will pay for the abutments and other elements, including local labour.

Speaking at a ceremony in Penniston, where the longest bridge will be built, Prime Minister Ralph Gonsalves noted that Maj. Manuel Querembas, who is heading the 45-member team from Ecuador, has said that his country is giving from the little that it has.

“And that is the mark of a true friend,” Gonsalves said, adding that of all the countries that help St. Vincent and the Grenadines (SVG) in rebuilding after the disaster, Ecuador has acted “most promptly”.

Gonsalves noted that Ecuador and SVG are members of ALBA, which he described as a very important multinational grouping, of which the CARICOM nations of Antigua and Barbuda, Dominica, and St. Lucia are also members.

“And the idea is to have an organisation of solidarity,” he said, adding that this country, which will teach 200 Ecuadorian teachers English from January, can make a contribution to Ecuador.

Santiago Martínez Espíndola, minister counsellor at the Embassy of Ecuador in Guatemala, which is also accredited to SVG, told the ceremony that in March, Minister of Foreign Affairs of Ecuador, Ricardo Patiño informed the embassy that Quito will rebuild the four bridges lost in the disaster.

“Today, October 28, 2014, I have the honour to represent the government of Ecuador in the opening of the works, as members of the Ecuadorian Corps of Army Engineers will be doing in the coming months,” he said.

Espíndola said since coming to office, President of Ecuador Raphael Correa has brought about many positive changes in Ecuador, including a redefined relationship with countries across the region and around the world, to achieve a positive impact through international instruments signed.

Correa believes that South-South cooperation is a powerful tool for strengthening the brotherhood and the economies of Latin American and Caribbean countries, Espíndola said.

“Under this scheme, … international solidarity is strictly observed in the frame of our modest possibilities,” he said.

The diplomat said that Ecuador’s Army Corps of Engineers is highly respected in their country, due to the reliability, efficiency with which they perform their tasks.

“I am sure they will have the support of local authorities and the people of St. Vincent and the Grenadines,” the diplomat said, adding, “… the sole purpose of doing this construction is to get closer to our people as we are brothers, equals, respectable, in solidarity”.

Querembas promised at the ceremony that his team will complete the construction of the bridges, within the eight-month schedule.

“We are soldiers, and, as part of Ecuadorian Armed Forces, we will accomplish our goal, supported by the virtue and willingness to give our best, respecting the law and the people of this country, taking care of its environment, respecting its culture and tradition of St. Vincent,” he said.