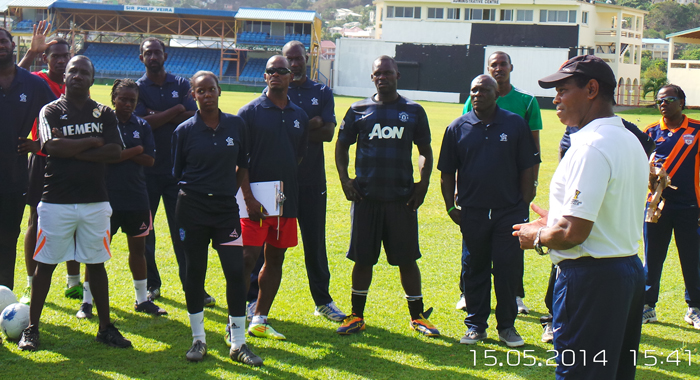 The initial D License Coaching Course in SVG was held in May. (Photo: E. Glenford Prescott)

Football coaches here will be given another opportunity to be certified/qualified as they attempt to move upward in that profession.

This chance for advancement will come with the hosting of a second FIFA/CONCACAF D License Coaching Course, which begins today (Thursday) and ends on Sunday.

The initial course was held in May when CONCACAF President Jeffrey Webb made his first visit to the country and opened the historic event. And it took place nine months after CONCACAF launched the coaching programme in Mexico.

The CONCACAF said then that the D License is the first official licensing programme for coaches and will be the foundation of the confederation’s coaching educational programme.

According to the CONCACAF, the D license is the first official qualification for coaches in the region and further licenses will be developed by the CONCACAF Development Office.

Previously, coaches in the region had to travel to Europe or other confederations for education and recognised qualifications.

The D License training course, educates coaches in the following areas: the principles of coaching, the adequate training by age, the fundamentals of planning training sessions, physical training, health and security, the development of community clubs, among other components of coaching football.

Reports say the D License course was also be conducted in the Cayman Islands, Aruba and Grenada last year and the CONCACAF said it is committed to enabling its 41 Member Associations to take advantage of the programme.

President of the St. Vincent and the Grenadines Football Federation (SVGFF) Venold Coombs said the hosting of the second course in such a quick time is a sign that his organisation is committed to the development of the game and the persons who are integral in its progress.

“It our intention to have qualified coaches and administrators coming out of every club here and by doing this the standard will improve for certain,” Coombs told I Witness News.

The latest edition of the D License Course will see 28 participants in attendance and will see Ces Pod and Lenny Lake conducting the programme.

The May course had 42 coaches in attendance and was conducted by Lake, Ettienne Siliee and Jonathan Martinez.

It would see 28 participants from as far as North Leeward and Sandy Bay. Brief remarks would be shared at the opening and then the Course would then get under way.

This Course is being facilitated by Ces Pod and Lenny Lake.