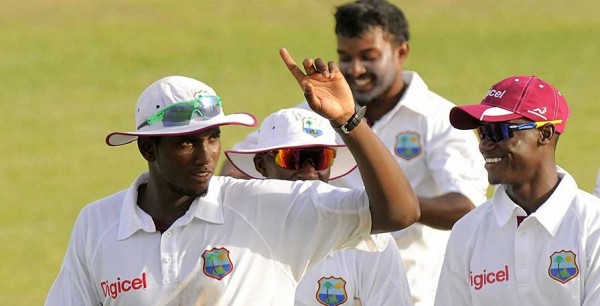 Five Vincentians have been named in the Windward Volcanoes 13-man squad for the first two matches in the 2014 West Indies Cricket Board Caribbean Professional League, which bowls off next week.

But there is no place for legspinner Keiron Cottoy who bagged the most wickets ([email protected]) in the just concluded senior Windwards Islands cricket competition.

Cottoy picked up wickets consistently during the tournament, which saw most matches becoming three-innings affairs. He had a best of 5/69 against Dominica.

SVG’s team coach Deighton Butler felt that Cottoy was extremely unlucky not have gain the nod of the selectors, saying his batting and high quality fielding would offer the Windwards a great deal.

Butler, a former Windwards captain, believes the team has a batsman too many and begs for the inclusion of another bowler, with Cottoy the preferred option.

It is not the first time that the tall all-rounder is being back-handed by the Windward selectors, having been dropped from the under-19 team after picking up the most wickets (38) in the West Indies U-19 tournament the previous year. The reason given that time was that “the selection panel had been replaced and were not familiar with the players”.

Cottoy, who was on a developmental contract with the WICB, five years ago years ago was also not called up by the Windwards when it was deemed by one selector (a Vincentian) that he was “bowling too slow”.

At that time, he took the award ahead of Jamaica’s Andre Creary, Kjorn Ottley of Trinidad and Tobago and Dalton Polius of the Windwards (St. Lucia). All three have gone on to play at the regional senior level in a number of matches, while the 25-year-old Vincentian, whose two first class matches came three years ago, awaits another call, seated firmly on the steps outside the door.

Asked about Cottoy’s omission, Windwards senior selector, Lance John was only prepared to say that he was a “bit unlucky” even as he admitted that Cottoy had bowled well throughout the tournament”.

John, a former Windwards and Combined Islands opener, said that there is still a chance that Cottoy can get in before the season ends because tournament is now being played over two rounds and “there is plenty cricket to be played”.

Also omitted from the squad is former West Indies A team pacer Delorn Johnson, once a fixture in the team, and Butler has no complaint about the decision of the panel with respect to the dropping of the left-arm pacer.

“He did not bowl as was expected and maybe the selectors believe that he was not up to his full fitness and hence the reason why they did not pick him, because he only took 1 wicket in the tournament and it was Dawnley [Grant] who was the best of our pacemen”.

The Vincentians making the team are Sunil Ambris, Kenroy Peters, Romel Currency, Alston Bobb and Lindon James. Ambris and Peters were not available to take part in the tournament owing to other commitments. Peters was absent for family reasons while Ambris is on tour with the West Indies A team.

The team remains the same from last year for the most part, with Liam Sebastien retained as captain.

There two other Dominicans in the squad — opener Tyrone Theophile and seamer, Mervin Mathew, with two St. Lucians in Johnson Charles and Keddy Lesporis, with Devon Smith, Andre Fletcher and Nelon Pascal the Grenadians.

Reports say that Pascal was the top pacer in the tournament and impressed all with his pace, control and aggression. Smith was the top batsman by some distance with a half century in each of his five innings in totalling 278 runs. Charles’ last gasp unbeaten century may have been his saving grace to get in ahead of Kavem Hodge whose 162 was the tournament’s highest individual score. Lesporis, with one good score, is once again being seen as fortunate to be traveling. Fletcher, like Ambris, was on tour with the West Indies A team and missed the tournament.

The team leaves for Jamaica on Monday.