Opinion: Is PetroCaribe about to fold and destroy the Caribbean as we know it? 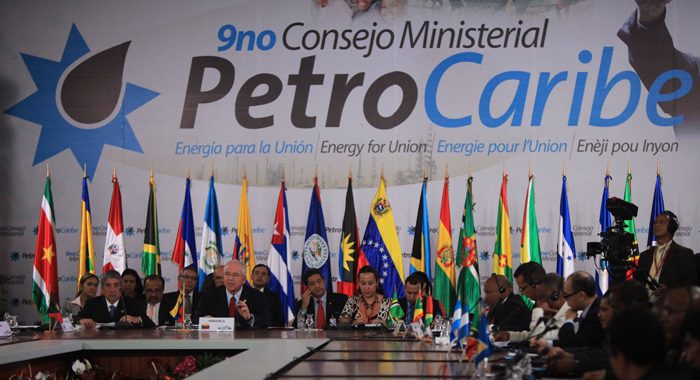 In St. Vincent and the Grenadines the initial tale the citizens were led to believe was PetroCaribe would supply us with cheap petrol, diesel and cooking gas. I ask was that quite simply a downright straight up and down lie? I personally think it was a lie designed to make ignorant people believe that Venezuela and the ALBA Marxist grouping were our real friends.

Many Vincentians were taken in, and even believed that cheap oil would bring down the price of electricity, diesel and petrol at the pump would fall, and cooking gas would be cut by half. In fact the people were allowed to believe that, no one corrected them.

The truth of the matter is that Venezuela is a member of OPEC, as such they cannot sell oil below the world market prices that is overseen by OPEC. Which just goes to show that the cheap oil claims by our government were simply out and out lies. They know now, and they knew then about the OPEC restrictions, but they chose to lie to us instead of telling the truth, and remember just withholding the true details is as big a deception as telling lies.

Then came the cooking gas crisis. I believe it was a make believe crisis manmade by someone within the ULP. Was it a false crisis created by making a shortage of cooking gas? Well was it? A pretend crisis that saw us being saved by a delivery of cooking gas delivered on a Venezuelan Navy ship. Remember the public panic that the crisis brought? Remember the panic buying of cooking gas it created?

Then something very dramatic happened in Kingstown, remember all the pomp and ceremony surrounding the moment when the Venezuelan Navy boat arrived in Kingstown harbour? How that had us hoodwinked? They didn’t just bring hundreds of bottles of cooking gas and leave. They moored in town for about a week and patrolled up and down our coast, making sure that everyone saw them; the Venezuelan military in their scruffy uniforms of slightly varying colours, a hotchpotch of what some may call “a granddads navy”. Then the political claims that our PM had saved us, remember all that crap?

The truth is that the Venezuelan cooking gas when it first arrived in its grey bottles was a very inferior gas; it burnt with a more yellow than blue flame, instead of a constant pure blue flame. It burnt with a yellow flame because it was a dirty gas, not as pure and refined as we normally get from our preferred suppliers of old. Suppliers who have given us good service for years until, that is, this present Marxist regime came along and wanted to implant Venezuelan gas and destroy our traditional businesses. Why, because it’s an ALBA directive for all member states that energy supplies are to be in state hands. They wanted to take over the bottled gas business.

I believe although the cooking gas quality has slightly improved, it’s still crap and emits several times more carbon monoxide than our regular supplies. Its poisonous fumes in confined spaces will kill, especially the very old and very young. That’s okay in Venezuela, there are more of them than there are Vincentians, perhaps they don’t mind forfeiting the lives of poor people for a meagre saving on the quality of cooking gas.

With regards to fuel, I believe we were quite simply lied to, it’s not cheap, it’s sold to us at whatever world market price is, under the observant eye of OPEC. The deal, if you can call it that, turned out to be on cooking gas, diesel and heavy oil products, not on petroleum itself. The retail price of cooking gas was a couple of dollars less for an inferior product and the diesel price at the pump remained unaltered, with the government taking advantage of any savings.

Under the PetroCaribe arrangement, several Caribbean member states, including St. Vincent and the Grenadines, purchase oil on conditions of preferential payment. Not preferential prices. Launched in June 2005, the payment system allows for purchase of oil at market value for 5-50 per cent up front, with a grace period of one to two years before repayment of the loan begins. The remainder can be paid through a 17-25 year financing agreement with 1 per cent interest if oil prices are above US$40 per barrel.

PetroCaribe accounts for 30 per cent of Venezuela’s production, the Curacao Chronicle has reported. Twelve of the 17 countries are from CARICOM, excluding Barbados, Montserrat and Trinidad and Tobago.

It’s a fact there is no free lunch as our Marxist-led government would have us believe; under a provision in the PetroCaribe agreement the terms have been changed. The loan that carried a minimal interest rate now carries a four-time increase at 4 per cent. The advantage for the receiving government is the loan facility. They sell the fuel to the garages and VINLEC, etc. at full price. They sell it at the full wholesale price with import tax on top, then on top of that VAT is applied.

It’s no longer cheap borrowed money; it’s now what one would expect from a long-term commercial deal.

If we lose PetroCaribe as a supplier, and go back to Trinidad as our previous supplier, they will skin us alive, and perhaps they are entitled to do just that. That’s always the problem when you’re not nice on your way up; you meet the same people on the way down.

What does that all mean to us as consumers? Currently under PetroCaribe we pay full price at the pump, the government buys as an importer from them at a CIF price, then applies big duties and loads VAT on top of that at a further 15 per cent; that’s a 40 per cent profit to the government right off the bat between what the pay and what they charge the gas station. Then we pay the inflated government price plus a markup put on by the vendor. Then the government pays PetroCaribe only 40 per cent of the CIF import price. Remember we are now paying at the pump several times more than the government is paying Venezuela. Then to make things worse for the citizen, when the 40 per cent loan and interest becomes payable, we or our children will have to pay the 40 per cent again, and it’s even worse than that because, after 20 years, the compounded interest loan will amount to more than double the amount of the original loan.

That means that we are paying about 140 per cent more for the fuel than we should pay; it’s a huge rip off, shrouded in lies and deception. What happens to the 40 per cent delayed for repayment to Venezuela? Well along with the duties, taxes and VAT, the government is running the country on it. Also paying the Cubans’ wages at the airport, and paying for the discounts paid to bond buyers, which amount to up to 24 per cent per annum interest. They are running the country on it because they have destroyed the economy; without it we would have imploded several years ago, broke and rejected by all because of our mal fiscal behaviour.

We were led to believe that the fuel came at a discount; it doesn’t. The Venezuelan petroleum minister and president of PDVSA Rafael Ramirez recently said of the deal: “We’re not talking about discounts… We’re talking about financial facilities, direct deliveries of products, [and] infrastructure.” The image that we were given was that everything would be cheaper, but I guess that was just a mirage image, a haze that we grasped and believed was real.

So all around, in whatever direction we look, we as a nation have been shafted, shafted by our own government. Our grandchildren are being saddled with what could well develop into a horror story in their futures.

Perhaps PetroCaribe is about to collapse; Venezuela is in a lot of trouble and they may well collapse also.

The Venezuelan problems are enormous. Hugo Chavez ordered and had delivered from the Russians billions and billions of US dollars worth of military equipment. Tanks, missiles, rockets, submarines, ships and boats, rifles and small arms. He took them on credit; payment is being made via a supply of oil to the Russians. The Russians have more than enough of their own oil, so they are selling oil of Venezuelan origin on the spot market in direct competition with the Venezuelans. With the recent international community deal struck with the Iranians, within six months their oil industry will once more be in full production. That means that there will be a surplus of oil, oil prices will tumble. As oil prices degrade, the Russians will require more barrelage from the Venezuelans to pay off their loans, which will mean that Venezuela will have even less to sell on the open market. What they do manage to sell will be at a lesser price because of the low current world prices.

With oil prices down from over a US$120 a barrel to about US$80 dollars a barrel, the Venezuelans are in deep trouble, deep in the doo-doo, because oil prices are tumbling and world supply is up. So they will be selling less at a lower price. Their economy is already in a state of collapse, with a 40 per cent pa inflation and food and produce shortages. Even household items like toilet rolls, pampers for child and adult, tampons, soap and toothpaste are in short supplies. Butchers shops that only sell chicken, no beef, no lamb and just a little pork. With virtually no tax revenue, because the state has nationalised almost every industry, which now instead of paying taxes, makes losses, hence no income.

Remember Fidel Castro once said, “The capitalists’ know how to earn it… we the socialists know how to spend it for them.”

He was right about that; you only have to look at the St. Vincent and the Grenadines’ economy to see how easy money can be spent. With almost no income, except scrounging, loans and PetroCaribe, we just keep on spending. I have classed scrounging and loans as income, because it’s doubtful we will ever be in the position to repay them in the long term. When we manage to get rid of this ULP government we will have to demand debt relief. Or simply stop paying them; we simply cannot repay them the hundreds of millions we owe them.

We also rely very much on financially milking Taiwan, that old friend and Chinese cash cow. If the Taiwanese ever get together with mainland China, they will no longer need our small countries to vote for them at the UN and support them at other conventions. It will be goodnight nurse for us. That is actually in the pipeline; on the books, as they say.

Can you believe that Cuba and Venezuela are countries that our current leadership wants to model SVG on? We must be very careful because we are actually heading in that direction. I believe we owe our country’s destruction and current downfall to the politics, ideas and policies of one man; if only we had known that in 2001. Now it’s time for the Vincentian people to realise and admit that they made a grave error, and dump him.

Let the process of a forensic investigation begin, for the first time in 14 years let’s know the truth about the out of control corruption.

3 replies on “Opinion: Is PetroCaribe about to fold and destroy the Caribbean as we know it?”