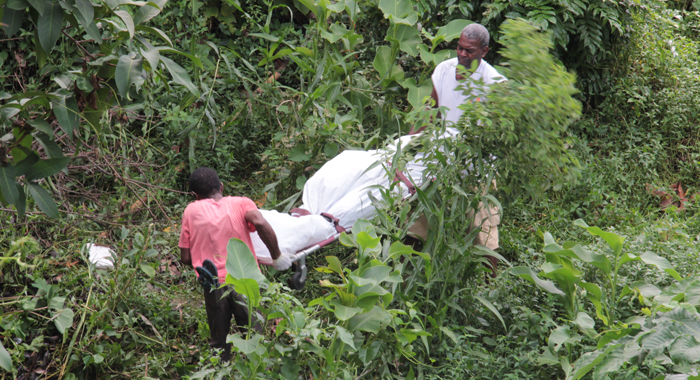 Funeral home employees remove the body of Keon Lawrence from the scene in Kingstown Park on Sunday. (IWN photo)

High-ranking officials from the Ministry of National Security were scheduled to meet Monday afternoon in the wake of three homicides on the weekend, which has brought the count this year to 36.

Prime Minister and Minister of National Security Ralph Gonsalves told journalists on Monday that the killings are “a painful matter”.

Police are investigating the death of Damien Blucher, a 25-year-old labourer of Glen, who sustained gunshot wounds about the body, at Glen, about 10:30 p.m. on Saturday.

Also, Lawrence Marks, 48, a labourer of Yambou was killed at Yambou, about 7 p.m. on Saturday.

The deceased sustained a gunshot wound to the face, police say.

His body was found in bushes near a riverside in Kingstown Park around 7 a.m. Sunday.

Gonsalves told a press conference that the meeting was “for us to view what we have been doing policing-wise and to see what other additional measures which we can take to address the policing dimension of this and to better secure our citizens”.

He said crime is “a complicated matter”.

“It has different sources. I believe that some of the hatred which is being spewed in the public media, they contribute to the lessoning of restraint by people who have a tendency towards violence; there are family issues, there are issues relating to greed, and, of course, I am satisfied that the fact that our Court of Appeal and the Privy Council have tied our hands in relation to the death penalty is a factor which is involved.”

He said SVG attempted “an effective restoration for the death penalty for murders of a particular type” in 2009.

He was speaking of the proposed changes to the Constitution that the electorate rejected in 2009.

“But we may have to come back to that to see in what way we can seek to address that area,” Gonsalves said.

The death penalty has not been used in St. Vincent and the Grenadines since the 1990s.

Gonsalves, however, said “there is no doubt in my mind that where the death penalty has been effectively removed, that it has emboldened some people to kill.

“And that is no fault of any government. That’s the Privy Council and our Court of Appeal,” he said, noting that some persons may argue that the death penalty has never been a deterrent.

“But I consider that in our context that it is. It may not be a deterrent in some other places in the world, Europe maybe, but here it is, in my view, a deterrent.

“We have to simply look at all that we are doing. We have a good framework but we have to decide on some other tactical things as to what more we can do in that area.”

Gonsalves asked rhetorically about what can be done in the case of absence-restraint killings and where persons are seeking revenge over drug deals gone sour.

“But what we have to do is to make sure that we improve our detection and make sure that we have the prosecution properly prepared so that the persons who are brought before the court could at least if effectively we don’t have the death penalty that they can be penalised appropriately with a lengthy jail terms.

“But it’s a matter which, the very fact that I am convening that high level meeting with the security at 3 o’clock will tell you that I’m responding in a proactive manner,” Gonsalves said.

Meanwhile, Leader of the Opposition Arnhim Eustace said separately on his radio programme on Monday, that when he heard of the killings his mind went straight back to his party Social, Spiritual and Redemption Charter, which it has failed to have debated in Parliament.

The charter contains the opposition’s proposal for tackling crime in the country.

“But the time will come when it will be passed, and you will see a new approach to dealing with the issue of crime in St. Vincent and the Grenadines,” Eustace said on the programme.

“We are very much concerned about preventive measure, not only after a person has committed a crime, for which we have institutions like the police and so on who are supposed to deal with that,” he said, adding that the nation must do things to prevent the youths from getting involved in crime.

“It’s an important issue for us in the New Democratic Party and when given the opportunity, we will make our presence felt where that particular matter is concerned,” Eustace said.

Clarification:  Police had told IWN that the murder tally was now 36. However, they later said that the figure had included two manslaughter charges, which are separate and distinct from murder.