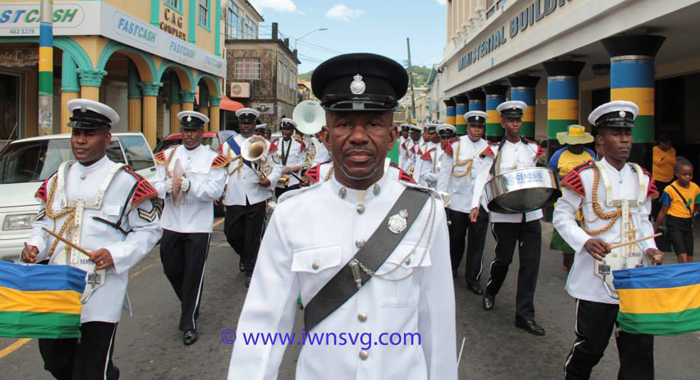 After Bernard Haynes’ mother died when he 9 years old, his aunt found it financially difficult to send him to secondary school when he passed the requisite exam. That was some 40 years ago.

So, he went back to primary school, and later passed the School Leaving Examination.

But, unlike many persons who passed the exam in the 1970s, Haynes did not opt to become a teacher.

He joined the Police Cadet Band.

And, that single decision earned this unassuming Inspector of Police, who is Head of the Police Force Band, a place in Vincentian history that will be difficult to match, far less to beat.

When the troops lined up on Oct. 27 for this year’s Independence celebrations, the nation’s 35th, Haynes was there.

He was there, like he has been since 1979, when the Union Jack was lowered, and the breadfruit leaf flag of Independent SVG was unfurled.

“I was a cadet there, and I am here up to this parade, 2014,” Haynes told I-Witness News after SVG’s 35th anniversary of Independence.

But this year’s independence parade could very much be Haynes’ last as a member of the troops. He is due to retire next year from the Police Force, the only job he has ever had.

Haynes joined the Police Cadet Band in 1976, and participated in the Statehood observations in ’77 and ’78.

He joined the Police Band in 1980, and it remained the only department to which he was assigned during his career as a police officer.

“It feels good. It is a milestone, and over the years, I’ve grown to like the Independence Parade and come to look [for]and expect something special,” he told I-Witness News about the fact that he has been among the troops at every Independence Parade to date.

The “earlier days” were also characterised by the playing of colonial songs, and military marches, and even Trinidadian calypsos.

“In recent times, we gravitate towards the local songs: calypsos, patriotic songs,” said Haynes, who became head of the Police Force Band in 2010.

Haynes’ 30-year journey to become head of the Police Force Band, was a difficult one.

“It was rough at first. When I just joined, they had a lot of experienced persons here, persons who could have played well,” said Haynes who plays the trombone, keyboard, and baritone.

“So I studied my music, because I got to love it very much and I used to like to practice. I spent a lot of hours practicing, because I always wanted to play to the best of my ability.”

“And that helped me build a better foundation, arranging, conducting, harmony, musical analysis and so on. And that made me more rounded.”

Haynes has also done courses by distance with the Royal School of Music, advancing to grade 8, and has attended a workshop in Kingstown, facilitated by Wynton Learson Marsalis a trumpeter, composer, teacher, music educator, and Artistic Director of Jazz at Lincoln Center in New York City, United States.

“I read a lot. I had a music book and I read a lot about music and so on. So I am also self taught too,” Haynes said.

Preparing the Police Force Band for the Independence Parade is a very hectic undertaking, with members rehearsing from 9 a.m. to 4:30 p.m. several times a week.

This is in addition to going to Victoria Park on Tuesdays and Thursdays for rehearsal.

“Rehearsal is a very serious affair. As you have heard, the testimony is there on the park when you hear the music playing, you know some preparation has gone into that,” Haynes told I-Witness News.

But life itself has provided Haynes with enough challenges to help with to cope with the demands of his job.

In 1969, at age nine, Haynes, who is originally from Calliaqua, lost his mother. He then moved to Ratho Mill, where he lived with his aunt until 2001.

“It was rough, because during that time, I passed common entrance to go to St. Martin’s, and my aunt who I was living with, my sister was also there, she said she will try with the girl (sister) to get into secondary school but it might be difficult to send me …

“So I didn’t go to a secondary school because my aunt said she will try with the girl, but she didn’t get any sponsorship to send me, because you had to pay in those days to go to secondary school,” Haynes told I-Witness News.

He went on to pass the School Leaving Exam, but chose to not become a teacher.

“I joined the Police Cadet at the age of 15 going on to 16, and there my career started. So, I never worked anywhere else beside the Police Force,” Haynes boasted to I-Witness News.

Of his 35th Independence Parade, Haynes remembers most fondly the 2011 event, when the Police Band did one of its first major displays, at which the drum major, Haynes, and another officer engaged in some break dancing.

“We had the crowd going. And years before, the crowd never used to be so big, but since we did that, every year, massive crowds have been turning out,” he says, adding that people now inquire about the special displays that the Police Band will put on during the Independence Parade.

But some persons have also criticised the police Force for the displays, saying that it is disrespectful of their uniform and the occasion.

“They have seen Trinidadians dancing, they have seen Grenadians dancing. We got some criticism, but the majority of persons said they have never seen anything like that. So, the excitement that was created there, the amount of praises and congratulations that the Police Band got, I felt happy and that was the most memorable independence I can speak of, right,” Haynes told I-Witness News.

But there was one year when the flu almost prevented Hayne from missing the Independence Parade.

One morning, he was feeling a little under the weather with the flu, but he still turned up.

“I was even coughing on the parade, but I made it through. A strong will, I went through and I stuck it out,” Haynes told I-Witness News.

Haynes turns 55 next year — retirement age for the Police Force. He told I-Witness News that he is not yet sure whether he will apply for an extended stint.

“Well, I take one at a time, but right now, I can’t say. I have done a lot of time here, and when your time comes to go, you have to look elsewhere,” he said.

If he does retire next year, Haynes, who is father of renowned Vincentian musician Reajhuan Baptiste, might become a music instructor.

“Seeing [that there is] this big demand from persons needing help, I am thinking about organising a music school to assist persons wanting music training,” he said.

But even as he prepares to leave the Police Force, Haynes is concerned about how few persons want to learn to play wind instruments. He noted that the majority of young people attending the police summer music programme opt for the pan.

“Persons are afraid of the wind instrument. They say it is hurting their mouths, take too much out of their stomach and it is hard to blow. But we need persons to get into wind instruments, because the Police Band right now, we are short on members,” he said, adding that the Police Band Cadets has been put on hold for the past three years.

Haynes is encouraging persons who are interested in music to join the Police Force then ask to be transferred to the Band.

“Many people don’t see music as a career, but I am an example. I have worked nowhere else other than the police Force, I’ve made it right here, so you can take music as a career,” said Hayne, who has played music in calypso tents, as well as for the bands Exodus, Asterisks, Resurrection, and Touch.

And as music, so is the Independence Parade dear to Haynes’ heart.

“Every year, the Prime Minister always says good words about me, and these things make me happy. So, even if I retire, I will still be going to see the parade, ‘cause the independence parade is dear to my heart…

“I think I will miss it, miss all the excitement and so on. I know it will be hard to get accustomed to how I will feel when I am off. I’ll miss it,” Hayne told I-Witness News.