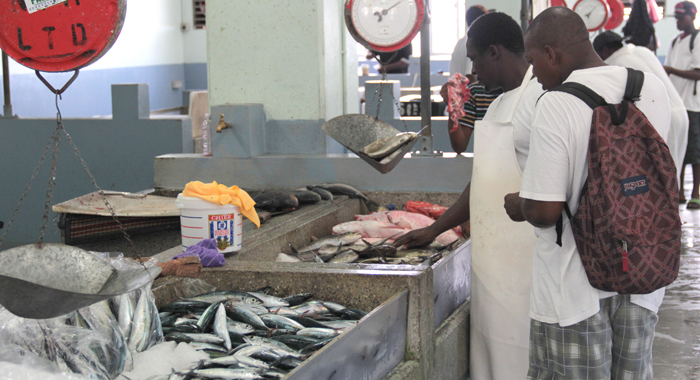 Fisheries and agriculture can make a significant contribution to the Vincentian economy, Opposition Leader Arnhim Eustace said, but lamented that the country still cannot export fish to Europe, almost 14 years after the Unity Labour Party came to office.

Former Prime Minister James Mitchell has said that in one of his initial meeting with Prime Minister Ralph Gonsalves after Gonsalves came to office in 2001, he asked Gonsalves to address the fish export issue as a priority.

“We’ve been blocked for 14 years now from exporting lobster and some fish and so on to Europe because of arrangements that need to be made at the fisheries centre … in Kingstown to put certain things in place,” Eustace said on his radio programme on Monday.

“It has taken the government all this time and they can’t do anything about it. All they are saying, during NDP time this happen and that happen. Well, you had 14 years to fix it, and you haven’t fixed it. Now, when NDP left, we were still making millions of dollars from bananas. Now, we are making none. We were making many millions from fish and lobsters, now we are making none,” said Eustace, whose New Democratic Party (NDP) was voted out of office in 2001.

Because SVG has not met the European standard, the country’s seafood cannot be exported to Martinique and Guadeloupe.

“And they demand the product which we have, but 14 years have passed and we can’t meet the conditions that they have asked for,” Eustace said.

He said that the NDP also sees opportunities in agriculture.

“… we have to deal again with what we have been doing with arrowroot, which is a lot of foolishness also, and try and get our agriculture sector back into a position where its contribution to the GDP of this country is significant,” Eustace said, noting that agriculture once accounted for 25 per cent of the nation’s GDP, but is now only 4 per cent.

‘And we now have zero export of banana to Europe,” he further said.

“It is just a story of decline and destruction of our economy and agricultural sector that we are facing,” he said.