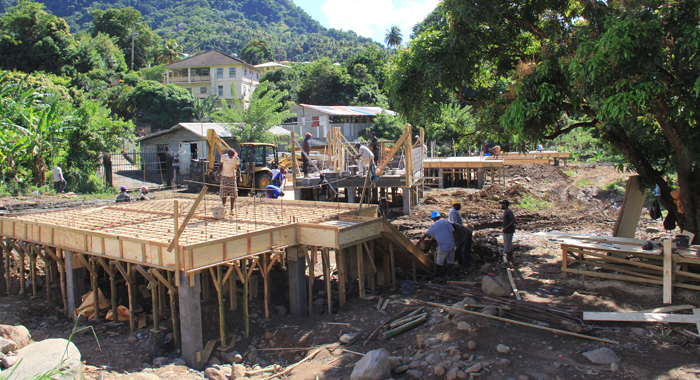 The HLDC has told its paying clients that their houses were delayed by the response to the December disaster. Since then the HLDC has built scores of free houses for disaster victims, including these under construction in Penniston. (IWN photo)

The government has begun construction of five houses for victims of the December 2014 disaster on land in Penniston from which a concrete house was washed away in the same disaster, almost killing its occupant.

The houses are being build near the Hope Bridge, where Joel “Broad” Joseph was injured as he was washed away when flood waters destroyed the 40- by 36-foot structure that had a dwelling quarters, as well as a non-operational bakery and shop.

The house was located on the bank of the Vermont River, which damaged significantly the Hope Bridge.

During the Christmas Eve disaster, the river mounted its defense and flooded out the ground floor of a two-story house on the other side of the bank across from Joseph, washing away a vehicle from that property.

The river also flooded out the police station, located some distance away.

The five houses are being built free of cost for victims of the disaster as part of the government’s recovery efforts, which have seen similar houses built at other locations across the country.

Joseph, for whom one of the five houses is being built, told I-Witness News on Wednesday that officials have said told him “the scientist said that the land just needed to full up back and it’s good for building again”.

He, however, told I-Witness News, that he is not convinced that it is safe to build houses there.

“I’m not too sure. It’s very hard for me to say yes or no,” said Joseph, who has been living at the Rillan Hill Community Centre since the disaster.

He said he will not be “too comfortable” living in a new house, on the same land from which his house was washed away.

“There will always be some kind of bad feelings,” he told I-Witness News.

But Minister of State in the Ministry of Works, Sen. Julian Francis, told I-Witness News on Thursday, that state officials are satisfied that the area is suitable for building houses.

“We’ve checked the engineers and that’s why all the houses are being built on stilts,” Francis said.

The Hope Bridge is being reconstructed, and Francis said that with the new design, and the realignment of the river, the engineers consider it safe to build house on the lands.

“It is like the other bank of the river where Vergel Browne and the others live, the first time it ever flooded over that side was last year Christmas, which is a one in a hundred-year storms; so, it is one of those calculated risk,” Francis said, referring to the two-storey house from which the vehicle was washed away.

“But, in my breast, in my belly, I feel it is safe to rebuild, especially with the design that is going in place for the alignment of the river and the new bridge.

“The new bridge is going to be slightly changed from its present orientation, and the river is going to be taken back to the middle. The realignment of the river and the re-orientation of the bridge, the engineers are convinced that it will eliminate any possible flood on that side,” he told I-Witness News.

Two of the contractors working on the houses expressed similar opinions to I-Witness News on Tuesday.

A contractor, who gave his name as Kirby, is building a 20- by 25-foot, two bedroom house, which also has a kitchen and bathroom.

He employs nine other persons and is contracted to complete the house in five weeks.

Kirby, a resident of Penniston, knows that a house was washed away from that same parcel of land.

“I feel the house them look more secure than before, because the house that washed away was too close to the river. But the one here now step up from the river a couple feet well,” he said of the new houses.

Another contractor, who gave his name as Douglas and “Touch I” of Keartons, Barrouallie, is building a 20- by 16-foot one-bedroom house.

Douglas also said he knows of the destruction of the house by the flood.

“The house been up there and it wash come down. But hear something now. If you look, you will see, we build it on columns four feet off the surface,” he said, adding that the concrete stilts (columns) are planted four feet into the ground.

“So, it’s good. If any water come, to be honest, this time, nothing go happen,” Douglas told I-Witness News separately on Tuesday.

He also noted that the bridge was being reconstructed in the area.

But a man who been living in the area since 1984, told I-Witness News that he has watched the river realign itself over the years.

The man’s house was also damaged during the Christmas disaster.

“Well, at least where they say they are going to give a good defense wall, I hope it will work out for good. But really and truly, when the river comes up, it develops real big, so I ain’t see the sense in building back there,” he said of the five houses that are being constructed on the other bank of the river.

He said that last Christmas was the worst that he has seen the river, but added that it overflows its banks “most of the time”.