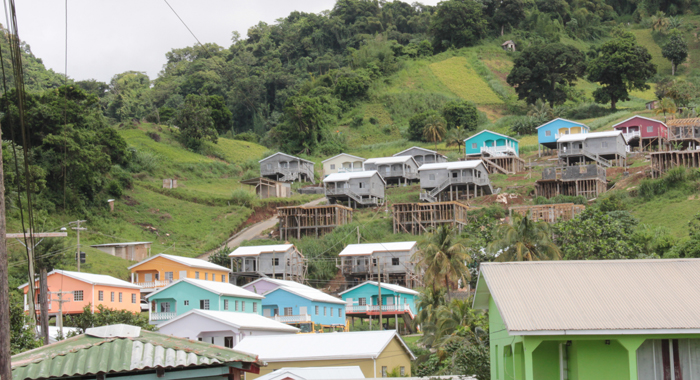 The Central Water and Sewerage Authority (CWSA) has defended itself against a suggestion by the Housing and Land Development Corporation (HLDC) that the CWSA is partly to be blamed for the HLDC’s inability to deliver houses at Green Hill to its clients more than three months after they are contractually due.

Manager of the CWSA, Garth Saunders told I-Witness News on Friday that the development “is clear evidence of a lack of proper design planning and execution of these housing projects”.

In a closed-door meeting on Nov. 6, the HLDC told homeowners that the CWSA has said that it will not be able to connect water to the houses until January.

The houses, which form part of the government’s low-income housing project, are at various stages of construction, and some would-be homeowners are still paying rent while they service mortgages long after they should have moved into their own houses.

In the meeting, a recording of which was obtained by I-Witness News, hopeful homeowners outlined to HLDC chair Beresford Phillips and manager, Elvis Charles, their difficulties in meeting their financial obligations, as a result of the incomplete houses.

At the meeting, Charles, who ran for the ruling Unity Labour Party (ULP) in Central Kingstown in the 2010 general elections and lost, then became manager of the HLDC in September 2013 after two years as a senator, responded to accusations that the HLDC did not care about the welfare of its clients.

Phillips, chair of the HLDC, and the ruling Unity Labour Party’s prospective candidate for Central Kingstown, where Green Hill is located, told the meeting that he is “upset” with the CWSA, adding that while the HLDC has no control over the situation, it is accountable to the homeowners.

But Saunders showed, to I-Witness News, a document dating back to 2012, showing that the HLDC failed to respond to communications by the CWSA outlining the steps that the HLDC should have taken to ensure timely connection of water to the area.

In an April 16, 2012 letter, while Morris Slater (now deceased) was manager of the HLDC, the state-owned housing agency informed the CWSA, also a state company, of the Green Hill housing project.

The letter asked that the CWSA provide a cost estimate for supplying the new area with water, saying that the HLDC would prefer it to be broken into three phases; because the project was to be completed in four years.

“As far as the CWSA is concerned, the project was to be completed in 2016. That’s the first thing we have to understand,” Saunders told I-Witness News.

He said the CWSA did engineering studies, cost studies and design, and replied to HLDC on May 16, 2012.

In their response, the CWSA told HLDC that because of the scope of the work involved, the pipes would be installed in two phases.

In its November 2013 letter to the CWSA, the HLDC said it was constructing 15 houses at Green Hill and was applying for “a temporary connection to facilitate construction”.

“That’s the only communication we had from Housing in over a year,” Saunders said.

He told I-Witness News that the CWSA heard from the HLDC again in October of this year, requesting a meeting.

Saunders said he told the HLDC that a meeting was not necessary at that point, and that the HLDC should write to CWSA outlining its request.

“Because we have a way sometimes we say things verbally, and we throw things around, and words change. So I like to document everything,” Saunders said.

The HLDC wrote CWSA on Oct. 16 saying, HLDC has extended the development at Green Hill, where there are 26 houses at various stages of construction.

“We hereby request an extension of the supply water lines to facilitate this development, as we are scheduled to hand over these houses soon,” the HLDC said.

The HLDC further indicated to the CWSA that that as a result of their involvement in the rehabilitation after the Christmas 2013 disaster, their financial position did not allow them to meet the full cost of the proposed extension.

“So, this is the first time we are hearing from Housing about the quotation that we sent in 2012,” Saunders said, adding that the CWSA had no problem with the HLDC’s request for deferred payment.

“But you came in October to tell us that you want to move in soon when you have a meeting and you give the impression to whoever that the CWSA is suddenly holding up a project,” Saunders said.

He said that to execute the project at Green Hill, the CWSA will have to install four-inch ductile iron piped from a new intake.

“This was told to them over two years ago. Nobody made any arrangements to pay or to say we can’t pay or we will pay some or we need it by X or T. But you’re coming now at the last minute to ask us to execute a project,” he said.

He said that the CWSA has low stocks of 4-inch pipe and its new shipment should arrive in December.

“You can’t just come without giving us a plan, a work schedule, to tell us you’re ready for your pipes now, without any communication,” Saunders said, referring to the HLDC.

In the May 2012 letter, the CWSA had explained to the HLDC that because of the high elevation in Green Hill, the source used to supply the lower area of the housing development, could not be used in the higher area, and that the new supply will include extending the transmission main from new source at Mamoon, near Mount St. Andrew.

Additionally, the CWSA told the HLDC that although it considers the request for deferred payment, the CWSA will not be able to install the required pipelines before January 2015.

“So, it is not [that] the pipelines will be in in January 2015. We will start the work in January 2015. It will definitely not be finished before the end of February, because we have to install the pipes, we have to test them,” Saunders explained, adding that he had gotten the impression from the I-Witness News report, that the HLDC was telling its clients that the pipes will be installed in January.

But while the HLDC was telling would-be homeowners that their houses will be delivered by the end of this month, Saunders told I-Witness News that the HLDC had not, as of last Friday, responded to the CWSA’s letter of Oct. 30.

“… not even an acknowledgement of this letter,” Saunders said.

“I just want you to understand how the HLDC functions,” he said.

Saunders agreed that the HLDC might be taking that approach because the CWSA is also a state company.

“But it should not be, because, to me, it is clear evidence of a lack of proper design planning and execution of these housing projects. We have to improve, because the co-ordination with the various utilities has to improve,” he said.

“We are willing to work along with the HLDC and any government agency, but what we need is co-ordination and communication. Nobody wants to do things the right way. They want to pick up the phone and call now for now. We don’t function that way. We function that way when there is a leak, when there is an emergency,” Saunders said of the CWSA, which is reputed for its efficiency.

Saunders said that whenever the CWSA is informed of a new development, be it private or public sector, it immediately sends the information to its engineering department to assess the technical feasibility.

“When we go into areas like that (Green Hill), marginal areas, we put people in homes and they only get water during the week and on weekends they get no water, because everybody is using, and what happens? They flood our lines and go on Facebook and complain ‘We can’t get water.’

“Well, we are not going to be operating that way.  We have a pledge, a commitment to quality and service,” Saunders said.

“If you are going to plan and develop a housing area, first of all, let us agree that you can be supplied with water and light and you have proper roads. And that is the problem that we have. Because any housing development that is being planned should go to Planning [Division] and Planning should send it to us, which they do. VINLEC, can you supply?

“Similarly, Housing. I don’t know if they went to Planning. They probably don’t, but they should. And then we will say what is required,” Saunders said, adding that GECCU and NIS are doing a housing development and wrote to the CWSA about it “very early”.

“Housing has to do that. But it goes beyond that. The cost of this infrastructure development has to be put into the cost of the homes. You cannot say it is a low-income home and artificially keep the cost low to be more attractive. We are going forth into a new century and we have to do things the right way. We have to be more resilient in our housing, and development infrastructure has to cater, has to take into account we have more frequent storms, floods and so on, so we have to have retaining walls, drains, proper roads; the drainage, the retaining walls have to be done prior to any construction; not after,” said Saunders, an engineer.

“If in all the housing areas, Clare Valley, Peter’s Hope, Green Hill, wherever, if we go in an build retaining walls and drains first, we will be much better off,” Saunders said, adding that as a homeowner he would prefer to move into a house that has a proper retaining wall ad roadside drains, but no tiles and ceiling.

“That, to me, is how the Housing and Land [Development Corporation] should sell the projects. … In projects like these, if you are not an engineer, you must have a strong engineering team who will advice you properly.

“In other words, engineers are not supposed to take politics into account or political expediency. That decision must be taken by other persons, but the engineers and the technicians must give solid technical, unbiased information.

“The person they are sending it to might not want to hear it, but discharge your responsibility and say what is required. You have a professional obligation to say ‘These houses require a 200-foot retaining wall that is 15 feet high before we even start construction.’ Because [otherwise], you create anxiety in the prospective homeowners.

“… Retaining walls and drains, that’s foundation work. You can’t rush them into a house and there is no retaining wall. It will get washed away. It’s not the way that we should do engineering infrastructure. Foundations must be paramount. And once you build the foundations, you have to protect them. So, rushing people into their houses, we have to stop that, and understand that we have to do it properly. We have to plan for VINLEC. Plan for CWSA,” Saunders said

“Let people know the real cost of this thing. Add another 20,000 and tell them that is for your retaining wall, that is for your drainage. Otherwise, you will feel vulnerable. When it rains, you will wonder. … And the worst thing is to invest 100,000 dollars, 120,000 dollars in a house and know it can just wash away,” Saunders said.

He said that he spoke to the board of directors of the CWSA and told them that the CWSA will have to assist the HLDC because it was hit hard by the Christmas disaster.

“That’s no problem at all. But don’t come at the last minute to accuse CWSA of mismanagement really. … You are accusing us of that when you have not communicated to us a schedule or how you are going to pay…” Saunders said.