Union head urges teachers to stand up and fight 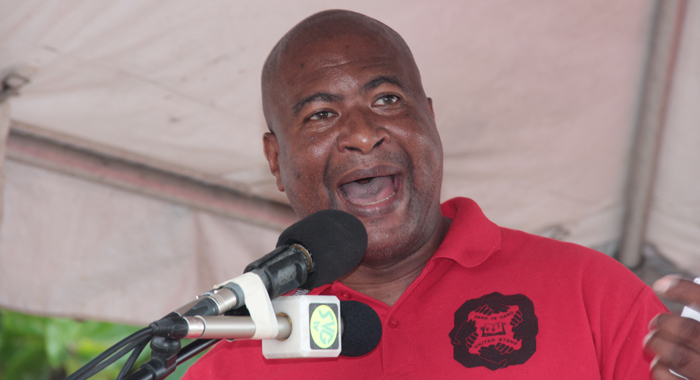 The president of the SVG Teachers’ Union has called on members to take the forefront on workers’ issues, saying that the state must be held accountable for continued violation the collective agreement.

“Brothers and sisters, we are in new times, we are experiencing new challenges, which are impacting on teaching and learning. It is impacting on the rights and freedoms of workers, and as a union, we have to continue to take the lead,” President of the SVG Teachers’ Union Oswald Robinson told the annual Teachers’ Solidarity March and Rally in Kingstown on Friday.

“If we fail to do so, the nation will not look upon us as a noble profession. And so, brothers, and sisters, I want to say to us here today that the teachers union continues to fight,” Robinson told the event, which commemorates the 1975 strike, during which teachers were teargased and arrested.

He said that the union on Friday met with the International Monetary Fund (IMF) as part of the Washington-based financial institution’s regular Article IV consultations.

“So when you think sometimes we are sleeping, we are dealing with the issues affecting teachers and workers in this country,” he said.

He said that during the meeting with the IMF, the union “articulated all the issues which we have been deliberating upon for years — issues related to appointments and the list continues to increase.”

He said that over 68 teachers are waiting to be appointed.

“And so the state must be held accountable, because our collective agreement continues to be violated. So we need to understand and appreciate that the struggle will continue. We have, as a leadership, to remain focused. We have to constantly reaffirm our position and defend our rights,” Robinson said.

He told the gathering that if the leadership of the union fails to perform its duties, they should vacate their posts and let others who have that vision lead “in the straight and narrow road that leads to victory”.

“This is not a time to sit back and be idle. We have to examine every single move that is made. Those of us in the leadership, we are seeing a number of paradigm shifts, and some of them are impacting on our freedom of association; our freedom of expression is being challenged, that’s why we have issues to be resolved in the court.

“Our collective agreement has been violated and the good wisdom of the judge said yes the Teachers Union has a case. And we will continue to pursue until justice is realized.”

The union has taken the government to court over a clause in the 2005 collective agreement, which the union says permits any teacher who has been a member for more than two years to seek six months’ leave to contest national elections and, if they lose, to be return to their teaching post by the beginning of the following term, with all their benefits intact.

Prime Minister Ralph Gonsalves, who was one of the state officials to sign the agreement with the union, has described the clause as “aspirational”.

Robinson noted that the union’s motto calls for unity, adding,

He said the issue of allowances is another of the topics that have been placed on the table for discussion.

While there is much talk about quality education, people are being placed in the system without teacher training, Robinson told the rally.

“The state must be held accountable for this. If we are going to have quality teaching we need quality teachers. So, we are calling on the state to do the right thing, because the teachers union is committed to quality education.

“Brothers and sisters, this battle is a very long one. This battle is one we must fight and we have to open our eyes and keep seeing the goals that we have to achieve. This is not the time to allow partisan political divide to control us. This is one union, the Teachers’ Union, and we have to hold each other’s hand and march forth to victory. If we fail to do this, we would have failed those who have led the struggle of 1975,” Robinson said.

The union head also addressed the issue of classroom size, saying that while the authorities quote the national average, there are

On the issue of pension, Robinson said that the position of the union is that when workers complete their service, they must enjoy a reasonable quality of life in retirement.

“We know there are all sort of talk about upping age, but nobody is telling us what is happening to the NIS (National Insurance Services),” he said, adding that teacher would like to see a repeal of the pensions law that that refers to the NIS.

He said the union has come to the position that it would like to have a say as to who represents them on the board of the NIS, nothing that the same delegate represents the Teachers’ Union and the Public Service Union.

“When the law allows one person or the office of one person to do it, we are not in any position to hold our representative accountable, to report to us, and to carry out our mandate as workers in this country.”

Regarding salary, Robinson said that while inflation has gone up 17 per cent, teachers’ salaries have remained the same.

“This is serious business and we cannot allow the people in authority to take us for granted. If we sit back and we relax, then that’s it, because the union is not the executive. All of us have a part to play,” Robinson said.