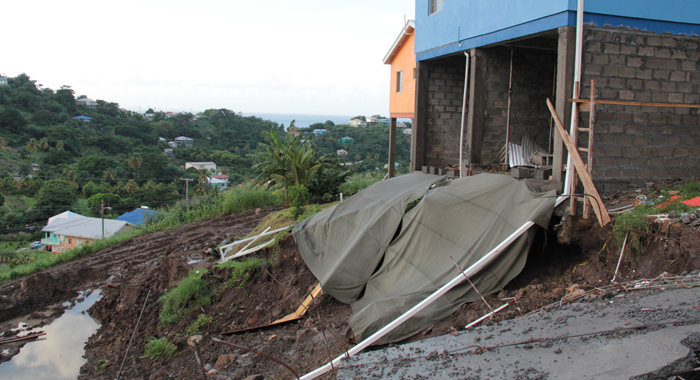 Chair of HLDC, Beresford Phillips, has refused to comment to I-Witness News amidst reports that this house will be demolished. (IWN photo)

Chair of the Housing and Land Development Corporation (HLDC) Beresford Phillips hung up the phone on I-Witness News Monday night amidst inquires by homeowners about whether the HLDC has decided to demolish a house in Clare Valley, where one collapsed in September.

“Wherever you get that information from, let them confirm it for you. You hear me?” Philips told I-Witness News when asked shortly after 8 p.m. whether there was any truth to the reports.

He had earlier in the brief telephone conversation accused I-Witness News of publishing information without verifying it, although this is the first article that we are publishing about the reported plan to demolish the house. (Listen to audio below)

Persons familiar with the development have told I-Witness News that the house will be demolished, while the HLDC reconsiders the scope of remedial work that is needed in the area.

I-Witness News was also reliably informed that the residents of the house in question and another on that street have since vacated the buildings.

On Tuesday morning, I-Witness News visited the house in question, which is located to the right of the one that collapsed on Sept. 19.

There was evidence of attempts to reinforce the house. But there was also significant earth movement at the lower embankment, to the extent that footing of one of the columns is already exposed, and large cracks have appeared towards the upper side of  building.

Two sheets of tarpaulins are spread on the ground near to house, presumable to protect it from the incessant rain.

Persons familiar with the development have told I-Witness News that the earth movement has already destroyed the septic tank at the house.

But while the HLDC has chosen not to comment on the matter, a resident of the area told I-Witness News that have been “some talks by residents about that”.

The resident, however, noted that a lot of work is taking place on the site where the house collapsed and on more than 10 of the other houses.

Since the collapse of the house in Sept., the state has been taking a number of step to shore up other houses in the state-planned and executed housing settlement, including several that state officials have said need urgent attention.

Phillips seemed displeased by a story I-Witness News published last Friday about a closed-door meeting that the HLDC had on Nov. 6 with persons who have applied and are paying for, and waiting to receive houses at Green Hill, three months after they were contractually due.

In the closed-door meeting, a recording of which was sent to I-Witness News, the HLDC’s clients complained about the late delivery of their houses, which have resulted in them having to pay both rent and mortgage.

In the meeting, Phillips, a businessman and aspiring candidate for the ruling Unity Labour Party in the next general elections, suggested the Central Water and Sewerage Authority, also a state-owned company, was partly to be blamed for the late delivery of the houses.

But Garth Saunders, general manager of the CWSA, on Friday showed I-Witness News documents proving that  the HLDC has not been responding in a timely manner to the CWSA’s communication about connecting water to the housing settlement in Green Hill.

Saunders also that the CWSA was willing to help the HLDC, but added that his company also has a reputation of quality service to protect.

Since those stories, some hopeful homeowners have contacted I-Witness News asking us to help them in getting information from the HLDC about the status of their houses.

“Is my money going down the drain or not? Are they testing the soil where our houses are to be built? How soon is soonest?” one person said, nothing that they started repaying interest on the mortgage four months ago, and the lending institution gave nine months before beginning to withdraw interest and premium from their salaries.

The HLDC said in the Nov. 6 meeting that having to rebuild houses for victims of the Christmas Eve disaster last year has put a strain on their resources.

“What I want to know is when will HLDC call persons who have already paid for land and 1st phase on homes and tell them their plans?

All it (HLDC) says is at soonest possible,” said the persons who asked for anonymity.

“I wish more people in my position can come out so we can demand a meeting,” they told I-Witness News.