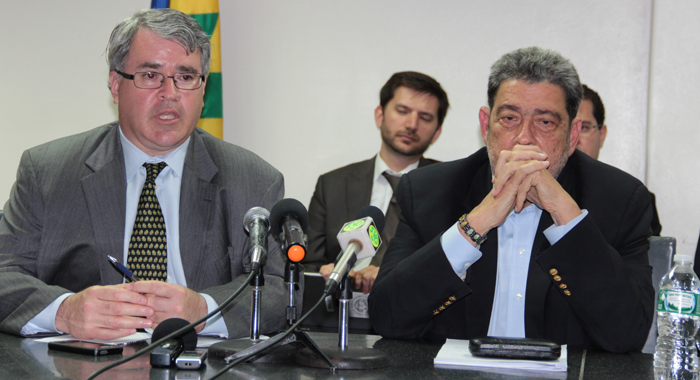 Elie Canetti of the IMF, left, and Prime Minister Dr. Ralph Gonsalves at the press conference on Tuesday. (IWN photo)

Preliminary findings suggest that the Vincentian economy registered “modest growth” in 2014, but the government is having difficulties meeting its obligations and keeping the budget together, Elie Canetti, International Monetary Fund (IMF) advisor, Western Hemisphere, told reporters in Kingstown on Tuesday.

“We are still working to finalise the numbers, but it looks as if there has been some modest growth in 2014,” Canetti said during a joint press briefing with Prime Minister and Minister of Finance Ralph Gonsalves at the end of the IMF’s article IV consultations, held over the last two weeks.

He said that his team has been looking at the impact on the economy of the December 2013 floods.

“And obviously, that at least in the first instance, had an impact, an adverse effect,” he said, adding that the extreme weather destroyed a lot of banana trees as well as fishing boats.

Canetti said his team looked at all sectors of the economy, but was particularly focused on what is happening with construction sector.

He noted that a there is a lot of construction activity because of the Argyle International Airport, and reconstruction of infrastructure destroyed by the floods.

“While the flood event itself was actually a disaster and terrible for any country to face something like that, what we typically find in countries where there have been a natural disaster, the rebuilding effort itself actually helps growth pick up, and so we have looked into that,” he told reporters.

“On balance, I think that the floods probably have impacted growth somewhat negatively this year, but, beyond that, I think there is underlying momentum in the economy.”

The IMF officials said that the consultations also examined what is expected to happen to the Vincentian economy in the medium term.

“And there we see a lot of positive signs. And the airport looms large in our thinking,” he said, adding that a new airport generally impact positively small economies that depend on tourism.

“It really does unlock a lot of tourism potential,” he said, adding that the IMF is “trying to understand what the tourism strategy is more generally.

“A key element that we are looking for is to see if once investors can see that the airport is really nearing completion, would we get a lot of investment in things like hotels, tour operators and also have airlines come to take advantage of the new airport?

“So, it is a little bit early in that regard to make an assessment, but, having spoken with a number of groups involved in tourism both in the private and public sector, I think there is going to be considerable interest in St. Vincent and the Grenadines once the airport opens.

“So, we are looking for reasonably substantial pickup in growth, probably starting in 2016 when we expect the airport will be in full operation,” Canetti said.

He, however, noted that the IMF focuses a lot on fiscal sustainability, adding that his team had many discussions with the Ministry of Finance to try to understand the fiscal situation of the country.

Canetti pointed out that in addition to the floods, the country has faced two hurricanes and several droughts over the past few years, and added that these natural disasters are very difficult to cope with, especially for a country as small as St. Vincent and the Grenadines (SVG).

“Our sense is there has been a difficult challenge in trying to keep the budget together, keeping debt moderate, and indeed, we have seen debt growing.

“And indeed, we have seen some signs of fiscal stress. There seems to be an increase in arrears that the government is having, in some cases, more difficulties meeting its obligations, but we have also looked a lot at the plans going forward, and so we have stressed to the Prime Minister and to other officials the need to put in place a medium term plan so that the debt situation can be turned around.

“And I think we have had fair discussions about what some of the elements of that policy could be, looking over the next five years,” he said.

“I would say it is not a dire situation here, there are other countries in the Caribbean where we have much greater concerns, but here, at the moment, the debt looks manageable, so it is important that actions be put in place to make sure that the debt measure as a per cent of the economy actually comes down over the medium terms,” Canetti told reporters.

He said the IMF is also focusing on the cost of energy, as this is an important element to economic growth across the Caribbean.

Domestic consumers of electricity in SVG pay a base rate of EC$0.50 per kilowatt-hour of electricity consumed, plus fuel surcharge and taxes of comsumption in excess of 200 KWh per month.

“The situation here, is in some sense not as bad, not as much of an obstacle, as elsewhere,” Canetti said.

“We are pleased to say that the pricing regime here is conducive to things like conservation, so we don’t think that a lot of energy is being wasted because energy is priced too cheaply. That is a problem in many countries across the world where they provide heavy energy subsidies, which, of course, are popular with consumers but ultimately lead to over consumption and the problems associated with that,” Canetti said, adding that his team thinks that the state-owned electricity company, VINLEC, is “fairly well-run”, and its plants and equipment “fairly modern”.

Cannetti said IMF agrees with the government that the best forward for the energy sector is to look into the various forms of renewable energy, the most promising of which, he said, seems to be geothermal energy.

The government has partnered with the Clinton Global Foundation and an Icelandic firm to explore SVG’s geothermal energy potential.

“I think the broad message is that there is probably not a lot that can be done about energy cost in the short term. In the long term, as geothermal and other renewables become viable, that will hopefully help to bring the cost of energy down, and that could provide a significant boast to the economy,” Canetti said.

He said that of special importance for the future, because of climate change and the likelihood of higher intensity hurricanes, the IMF is trying to understand the elements of government policy that will try to make the economy more resilient should there be future natural disaster

“And it would be miraculous if you didn’t have another natural disaster over the next decade. That seems to be the frequency of occurrence — once every decade, but it has been more frequent lately.

“So, we’ve looked a lot into what are the elements of physical resilience that are being put in place,” he said.

To illustrate, Canetti said his teams looked into the reconstruction of bridges damaged during the disaster last Christmas which are being re-built to much stronger and higher standards.

The team also met with the Ministry of Agriculture and other ministries to try to understand some of the programmes they have to deal with slope stabilisation, re-channelling river, and reallocating houses in the path of future floods.

“So, we feel a lot’s going on, but a lot has to be done and a lot more will be done and also the World Bank and the Caribbean Development Bank are contributing to that. So, that’s something I would say we will be monitoring closely.”

Meanwhile, Gonsalves said he was pleased with the IMF findings.

“I am pleased that the IMF has found that despite all the challenges we have had, there is modest growth…” he said.

“I think that is an assessment that will resonate with Vincentians, and you have done that assessment independently, taking into account comparative island states,” he said, adding that his government has a debt management strategy, which it updates all the time

“I want to thank you for your comments on the big issue of renewable energy, particularly geothermal, which is potentially a game changer … It’s good when we have independent persons come in and do assessments. As you know, I don’t always agree with the IMF on everything,” Gonsalves said.

“As a member of the IMF, … it is important for us to work closely with the IMF, the World Bank and other international financial institutions, regional ones, simply because we need them to be with us as we try to have sustainable development for the betterment of the lives of our people,” Gonsalves told the press briefing.