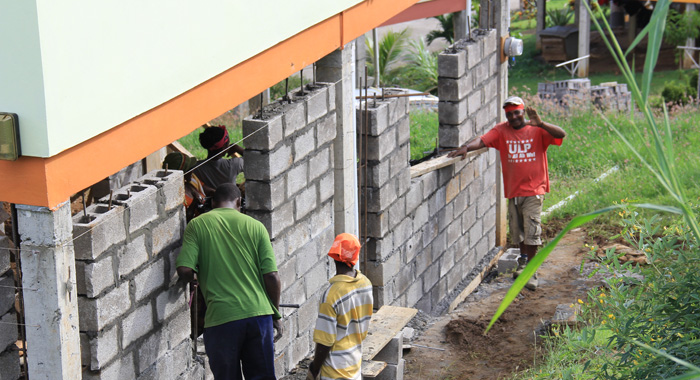 The government has budgeted EC$3.3 million to stabilise shaky houses and build drains and other infrastructure in its Clare Valley housing project, where citizens invested some EC$10 million in houses, one of which collapsed in September.

“We are estimating about 3.3 million dollars. That is our initial estimate. Naturally, when you work in those areas… and you proceed to do work, sometimes you realise that there are more challenges than what you anticipated. We suspect that it will run us under 3.5 million dollars,” Minister of State in the Ministry of Works, Sen. Julian Francis told I-Witness News on Wednesday.

Five contractors, each with a team, of 13 to 15 workers are employed at the housing development.

Francis said that he anticipates that the works, which began four weeks ago and has been affected by rain, will last half a year.

“I suspect that we have six full months there. Naturally, the pace will pick up once the weather [improves],” he said.

Francis said that workers are doing “significant, substantial work to the foundations” of 15 houses and work might have to be done on another 14 to 15 houses.

“The homeowners are pretty comfortable. I had a town hall meeting, a closed session, on Saturday with the homeowners, with the [engineering] crew,” Francis said, adding, “It was a very amicable and understanding meeting, so we are progressing.”

Meanwhile, engineer Dexter Gellizeau, who is overseeing the corrective work, told I-Witness News separately on Wednesday that that work is progressive “quite fine”.

He said workers have completed remedial work on four houses and homeowners seem to be satisfied with the work done.

He pointed out that many homeowners had complained that their houses were shaking.

“We came up with a retrofitting design that, in my opinion, would remedy the effect that they were feeling on the houses,” he said.

“And so far, with the few houses that are finished, everything seems to be working as we planned,” he told I-Witness News.

Work is also progressing on installing drains in the area.

“The drainage had to be improved in order to alleviate some of the problems which caused the slippage in front of the building which collapsed,” he said, referring to another house, which will be demolished because the structure has become compromised as a result of earth movement.

Regarding the drainage works, Francis said the frequent downpours over the past few weeks have been a set back.

He said a piece of heavy equipment that was repaired recently is being used to cut a road to an area of the project where the Housing and Land Development Corporation (HLDC), which constructed the housing project, will build three houses for the Nantons, whose homes were destroyed in the Christmas floods last year, killing five family members.

He said the equipment will then be used to cut the main contour drain, at the top of the development to take the water from the forest and the hill down into the Clare Valley River.

“So, we will stop a lot of the water coming through the development,” he said, adding that other substantial drain work will be done in different areas of the development.

Three major drains will be built, including one immediately above where the house collapsed, Francis told I-Witness News.

Curb walls will also be built to to stop the flow of water on the concrete road, he said.

The government has said that the house collapsed because of the type of soil, poor engineering and poor workmanship.

Asked what should have been done to avoids the problems and what lessons can be learnt for housing developments in the future, Gellizeau, who has been contracted to do the remedial work, told I-Witness News:

“I’m supposed to give a report down the road and that’s what we have been doing while working here. We have been studying the condition that lead to such a thing and basically I will be issuing a report to the minister sometime in the future as to what happened. We are still carrying out investigations as to … underlying cause.”