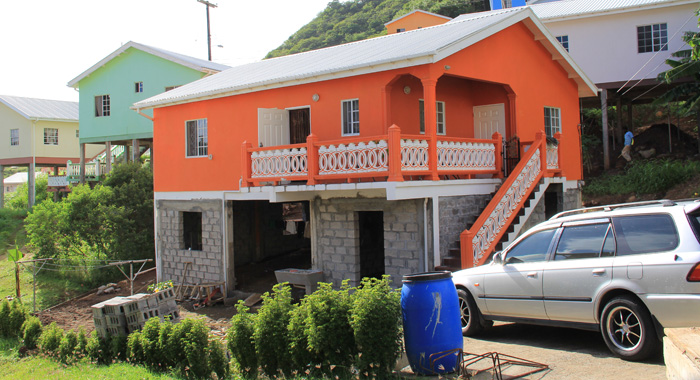 Jasmine Bentick, owner of one the four houses in Clare Valley on which remedial work is complete, says most of her problems have been alleviated.

“I tell you, it is like a brand new house,” she told I-Witness News on Wednesday.

The government has launched an EC$3.3 million dollar project to reinforce shaky concrete houses and build drains and other infrastructure after a house in the area collapsed on Sept. 19.

They have also decided to demolish a house that became compromised as a result of rain.

In September 2012, Bentick moved into the house, constructed by the Housing and Land Development Corporation (HLDC) under the government’s low- and middle-income housing initiative.

She told I-Witness News that since moving in, she had been having a lot of problems including cracks and movements of the house from side to side.

Bentick, a nurse, told I-Witness News on Wednesday that she had been reporting the problems to the HLDC for the past two years, but nothing was done until a house collapsed in the area.

The owner of that house had also complained to the HLDC that her house was shaking.

“I hope I am not talking prematurely, but it feels good; I have not had any shaking since they did it (remedial work),” Bentick told I-Witness News.

Workmen have reinforced the columns (stilt) under Bentick’s house as well as erected reinforcement walls.

She told I-Witness News that she specifically asked to work at night for a month so that she could be at home to see what was being done to her house.

“I am satisfied. And mind you, if I am having any problem or if I am to have any problems in the future, I will talk. I will make it known, but now, I am fine. My house is not moving,” Bentick told I-Witness News.

“There is still some stuff to be done but, for now, I am stable and I am satisfied,” she however added, saying that drainage is yet to be built around her house.

“But I understand that as many houses as possible need to be stabilized,” she said.

Work is underway on 15 houses in the area, and work may have to be done on a further 15, state officials have said.

One reply on “Homeowner pleased with remedial work in Clare Valley”