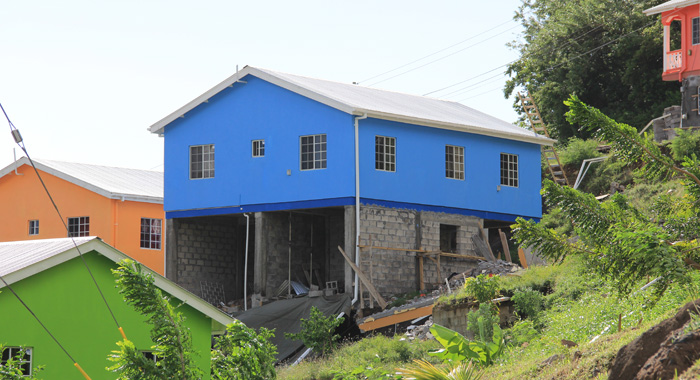 The government has decided to demolish this house. (IWN File Photo)

The government will demolish a house next to the one that collapsed in September, in the Clare Valley housing project, Minister of State in the Ministry of Works. Sen. Julian Francis and engineer Dexter Gellizeau confirmed to I-Witness News on Wednesday.

The confirmation came two days after Beresford Phillips, chair of the Housing and Land Development Corporation (HLDC), which executed the project, refused to comment on reports that the government had taken such a decision.

“Wherever you get that information from, let them confirm it for you. You hear me?” Philips, who is hoping to be the ruling Unity Labour Party’s candidate for Central Kingstown in the next general elections, told I-Witness News by telephone.

Gellizeau told I-Witness News on Wednesday that workers have essentially lost a race against the weather, hence the decision to demolish the house.

“We were trying to get in a retaining wall, but the constant rain since we got down here, it wasn’t letting up at all so we couldn’t get up the foundation because the rain keep bringing down a lot of stuff in the foundation as we excavate the foundation.

“And as more rain comes we have been getting a lot of slippage along the area that eventually, from a safety point of view, it (the slippage) is kind of too close to the building,” he told I-Witness News.

I-Witness News visited the site on Monday and Wednesday and the footing of one of the columns of the house was already exposed as a result of the earth movement.

“As you see, we are not doing any work there, because every day the rain comes and you can’t get to do anything. We were kind of fighting a battle against time and the rain certainly ain’t helping us with that part of it,” Gellizeau explained.

He said engineers have come up with a split-level design for a specially-engineered concrete cantilever wall.

“So far, we haven’t been able to get any headway. All we’ve been doing is excavating,” he said.

Regarding the decision to demolish the house, Gellizeau told I-Witness News that engineers don’t take chances.

“We as engineers don’t go with 50-50 chance. If we had gotten in on time to get that wall up, and the prediction in term of the weather that is predicted to come in the next week or two…, in terms of safety, it is really not worth taking the risk. With such a situation, we have to look at safety first,” he told I-Witness News.

The house is among four that Francis had said needed urgent attention.

“It is basically our job to ensure that everybody is safe in the area there that is close by. Those investigations will give us something of what is happening below there. But, in the meantime, we are still doing some shoring up of those houses as well just in case, so that something like that cannot happen.”

He said that a crew specialized in demolition has been brought in to examine the house and give a costing for it destruction.

Meanwhile, Francis said that he asked the residents to vacate the house two weeks ago.

“Two weeks ago, I asked the residents, for their peace of mind, to vacate the premises and to rent furnished quarters.

“Their belongings are in the house, but the house is now reflecting stress cracks at the rear and we have decided that we will take the house out — demolish the house.

“We have made arrangement with the homeowner, their personal belongings, furnishings and so on, we are in the process of getting those packed and moving them out in storage and we will find a plot of land that he is satisfied with and we shall reconstruct another house for them at the cost of the Corporation,” Francis told I-Witness News.