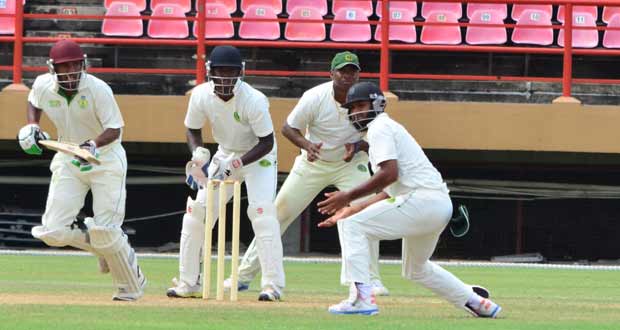 Sunil Ambris scores his maiden ton against the Guyanese.

The Windward Islands Volcanoes, sitting one from bottom and still griping from their narrow 13-run defeat at the hands of Jamaica Franchise, go into their second match in the WICB Professional Cricket League Regional 4-Day Tournament against Guyana Jaguars, starting on Friday at Guyana National Stadium.

Guyana Jaguars, on the other hand, sit atop the standings, a position unfamiliar to them following their innings and 10-run triumph over Leewards Islands in their opening match.

The Windwards looked set to record a come-from-behind victory against Jamaica until surrendering their last 3 wickets for 4 runs to lose in the final half hour.

They would be hoping that their batters put in a better showing with veteran opener Devon Smith (74) hitting the only half century for the Windwards and of the match, while his opening partner, Tyrone Theophile,, with scores of 24 and 40 the frontline batsmen to get pass 20 in both innings.

The Guyanese have found themselves at the lower end of the standings over the last couple of years and would be hoping to build on their success with West Indies “runs machine” Shiv Chanderpaul, who passed 5,000 regional first class runs during his innings of 45, still around for that match before heading off to South Africa.

West Indies batsman Narsingh Deonarine, with a century, carried the Guyanese batting and will be looking for some consistent performances to break back into the regional team. He also achieved the milestone of reaching 4,000 regional first-class runs during the match against the Leewards.

The Windwards Volcanoes were undone by first the pace of young fastbowler Marquino Mindley, whose first innings burst of 5/35 and a 4-wicket from the ever-threatening left-arm spinner Nikita Miller left them reeling. Then it was the turn of legspinner Damion Jacobs, who, for the second year in succession, had the Windwards batsmen at sixes and sevens. He finished with 7/72 to follow up on his 8/47 last year in the final of the competition.

That Volcanoes spin deficiency so ruthlessly exposed by Jacobs will be heavily tested by Davendra Bishoo, Versammy Permaul and Deonarine in conditions, which should be helpful at Providence.

The Volcanoes will enter the match with some level of confidence in that they have not lost for 11 years to the Jaguars and have been led on first innings in drawn matches only twice during the same period.

But on current form and with the different fortunes of the two teams in the opening match, analysts have placed the Jaguars as favourites to be the ones “galavanting” on “victory street”.

Reports say that neither side has changed their squad.

Information coming out from the WICB said that it has approved a change of playing hours for this match and it will now start half-hour earlier than regularly scheduled, beginning at 9:30 a.m., with the intervals adjusted accordingly.