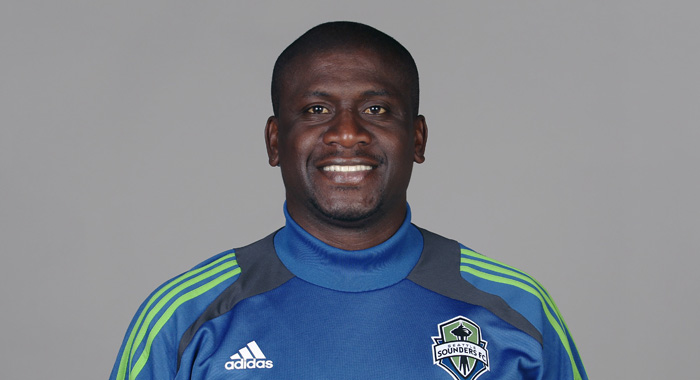 Former national football captain Ezra Hendrickson, incomprehensibly ignored yet again to be named on the honour list as a sports ambassador in his native St. Vincent and the Grenadines, is stealing the headlines in his adopted home, the United States.

Information coming out of North America says that Hendrickson, who is a long-time Seattle Sounders assistant coach, has been named the first head coach of the newly formed Seattle Sounders FC 2.

Hendrickson, who returned home in the mid-1990’s to represent SVG in World Cup qualifiers, provided one of the most formidable defences for this country — in combination with current national head coach, Corneilus Huggins, his assistant Wesley Charles and Burton Forde.

He was later elevated to captain and retired in that position after 12 years of wearing the national colours.

Over the last 10 years, the Government of St. Vincent and the Grenadines has named a number of sports personalities as Sports Ambassadors, but have ignored both Hendrickson and retired NBA player, Adonal Foyle, whose exploits have lifted the profile of SVG in North America and beyond.

This year, former national defender Stanley “Luxie” Morris, Dr. Halimah DeShong, Deighton Butler, Denis Byam and Sabrina Mitchell were those on whom the status of sports ambassador was conferred.

But Hendrickson, based on comments from some quarters, appears not to be in favour, purportedly because of his family’s political persuasion. Persons close to the ruling Unity Labour Party (ULP) have vehemently denied this, although they have not put forward a sound reason for Hendrickson being overlooked again.

Mitchel, the daughter of former prime minister, Sir James Mitchell, is a sports administrator, while Byam is a former Windwards cricketer and now a physio-therapist who travelled with Prime Minister Ralph Gonsalves to Cuba recently, where Gonsalves was treated for a muscle injury.

Butler, who hails from Gonsalves’ constituency, is also a former Windwards cricketer.

Hendrickson, 42, has spent the past six seasons as an assistant coach with the Sounders, the USL PRO side’s parent club, and reserve team head coach, following a 14-year playing career.

He made a short trip here two years ago to look at potential talent to recruit for the Sounders, but indications are that not much materialised from that visit.

Information on the Sounders website said Hendrickson played parts of eight seasons for Sigi Schmid, including three in Columbus prior to his retirement.

He also played in 32 postseason games with five goals and three assists.

Hendrickson was a member of three MLS Cup championship teams, winning two with Schmid. Together, they won the 2002 MLS Cup with the Los Angeles Galaxy and the 2008 MLS Cup in Columbus. Hendrickson was also with the champion D.C. United team in 2004, the website reported.

Reports say the lanky athlete, originally from Layou, joined the Sounders as an assistant coach in 2009 following his playing career.

“I feel very honoured to be appointed head coach of S2. Player development is a very important and integral part of any club,” said Hendrickson.

“I’m looking forward to developing our younger players as they come through the program, so that we as an organization can have that sustained growth and success,” he told the media.

And the Sounders Website said that in four seasons as Sounders FC Reserve League Head Coach, Hendrickson led the Rave Green to a 19-13-7 record from 2011-14, including an 8-1-1 record and West Division championship in 2011. This season, the Seattle Reserves finished 3-1-3 and went unbeaten (1-0-3) against MLS Reserve opponents.

“This is a great opportunity for Ezra and allows for good continuity in preparation for the S2 players, the first team and Seattle Sounders FC overall,” Schmid said.

“Ezra knows what we’re looking for, knows what it takes to play at this level, and he provides a great bridge from S2 to the Sounders FC first team.”

An All-American and business administration major at Drake University, Hendrickson first played professionally with New Orleans of the USISL Select League (1995-96). Hendrickson earned his U.S. Soccer ‘A’ Coaching License in December of 2008.

He has two daughters, Xavia and McKenzie.

Foyle who was the seventh draft in the 1997 NBA Draft represented the Golden State Warriors before moving to the Orlando Magics just prior to his retirement in 2009. He also elected first vice president of the National Basketball Players Association. He averaged 4.1 points and 4.7 rebounds for his career.

The Canouan-born Foyle, the nephew Lambert “Lambi” Baptiste a well- known supporter of the opposition New Democratic Party (NDP) was inducted into the Sports Humanitarian Hall of Fame for charitable work with his Kerosene Lamp Foundation.