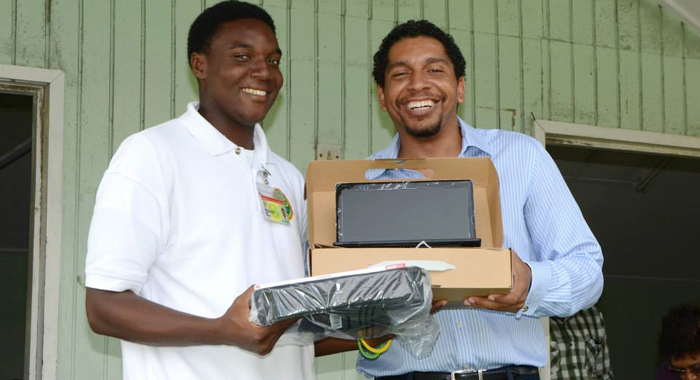 Minister of Information Technology, Sen. Camillo Gonsalves on Friday handed over Acer laptops to students of the St. Vincent and the Grenadines Community College (SVGCC) Division of Technical and Vocational Education.

The handover took place at the compound of the Division of Technical and Vocational in Education, Arnos Vale.

Over 400 laptops were distributed to parents, guardians, and students at the Division of Technical and Vocational Education. The students also received Microsoft Office and other software, manuals, and laptop cases.

Gonsalves said that on Tuesday, students of the Division of Arts, Sciences, General Studies, and Teacher Education of the SVGCC received 588 laptops.

He congratulated students and their families for accepting the laptops, which will be a very useful tool in their educational development. Every job will require computer knowledge and everywhere you go your employer will ask you if you have computer skills, Gonsalves stated.

He cautioned students not to treat their laptops in a careless way or to abuse them. He told students to treat the laptops with the respect they deserve in honour of the very hard work it took several leaders to source them.

Recipient of her first laptop and Agriculture Science student, Sherry Barker of Park Hill, said she was extremely pleased to have received her laptop.

Barker stated that she never had the chance to have her own computer. Previously, she relied on friends to use their computers or the computer lab at her school to get her work done.

Barker said she would now be able to do her schoolwork, get better grades, and connect with her family abroad.