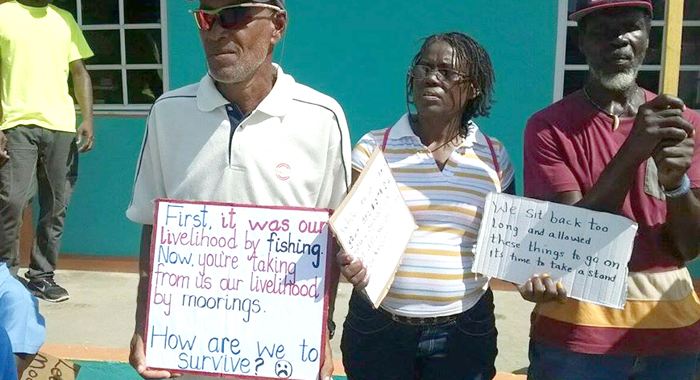 Deputy Director of Grenadines Affairs, Herman Belmar, says he was simply carrying out the instructions of the Tobago Cays Marine Park Board, ordering the removal of moorings in Mayreau by last Friday, Nov. 28.

On Friday, moorings operators in Mayreau travelled to their southern Grenadine neighbour, Union Island, where they picketed the decision of the Park.

Information reaching I-Witness News suggests that the operators were given just one week’s notice to remove the moorings.

Belmar did not elaborate on the development when I-Witness News contacted him on Saturday, saying that he had not received any feedback officially.

“I am not commenting on rumours, because nobody has said anything to me,” he said.

In a telephone call to the opposition New Democratic Party’s daytime programme, “New Times”, on Friday, Mayreau resident Theresa Bartholomew said that a group from Mayreau had travelled to Union Island, where the marine Park’s office is located, to stage a protest “surrounding the wickedness they are doing to us”.

Monroe Forde, who identified himself as the leader of the protest, told the radio programme that on Nov. 21 Belmar, who is based in Bequia in the northern Grenadines, went to Mayreau and delivered a letter asking persons to remove the moorings by Nov. 28.

‘That’s all we have’

“We are here to protest against that decision and to ask the Marine Park Board to reverse that decision because we have people in Mayreau who are benefitting, who are making a living through this moorage,” Forde said, noting that there are not many employment options in Mayreau.

“It is either fishing or tourism. That’s all we have,” he said, adding that the incorporation of Mayreau into the marine park has resulted in restrictions on where residents can fish.

“… and when people find other ways of making a living or making gainful employment not just for themselves, but in order to support their families, what are they to do when you are demanding that they remove the moorings from where they are,” Forde said.

Forde called on the government to reverse the decision, saying, “Mayreau is a very small place, jobs are limited, there is nothing much we can do. So when you take this approach to more or less take food from our plate, what is it you want us to do? How are we going to survive?”

He said that while residents have been ordered to remove the moorings, nothing has been said about alternative sources of income.

“So we are asking them, we are pleading with them to please reverse that decision.”

He said that the decision to remove the mooring was done, without consulting residents of Mayreau, charging this was also the case with the decision to incorporate the island into the marine park.

“There is nobody living in the Tobago Cays. We have people living in Mayreau, and the way in which these people are making a living is through tourism and there isn’t a lot to do…” he said, noting that income from the moorings is seasonal.

“We know that the relevant authorities are listening. We are asking them please, to take into consideration the fact that jobs in Mayreau are already limited. … We are pleading with them to leave these people alone.”

Nigel Forde, who identified himself as owner of the moorings in Mayreau, in a call from the United States, said he invested $30,000 in setting up the moorings, and did so without help from the authorities.

He said he set them up the mooring because he saw a need to generate employment for residents of Mayreau.

Forde said that he did not receive a response from the board of the marine park, asking them to give him permission to operate the moorings. He, however, said he recently received a call from Belmar saying that the moorings should be removed as the park will be installing its own moorings.

Forde said he asked Belmar what would happen to the people who are employed in managing the moorings.

“What kind of government is down there? What kind of government is actually running Mayreau or the Grenadines, per se? Because you cannot come into someone’s home and say ‘You need to get out because I need to move in’, without a fight. It’s not going to happen. I am so happy and so proud of the stand that Mayreau people, we are taking to prevent this from happening,” he said.

Residents say they are left out — MP

And, Member of Parliament for the Southern Grenadines, Terrance Ollivierre, in a separate call to the programme on Friday, said he had heard that the moorings have to be removed to facilitate upgrades to the marine park.

“If you have moorings there already, you are going to upgrade the area, why not work with the people in order to provide a sustainable means of earning a livelihood instead of moving them in the first place,” said Ollivierre, an opposition lawmaker.

Ollivierre said he thinks this is one of the things that sparked the protest.

“They (residents) are saying that they are left out, they have no means. They (authorities) are cutting off their (residents’) means of earning a livelihood for themselves. So, you can understand the outcry and the feelings of the people,” he said.

Ollivierre criticised the manner in which the decision was taken.

“Here we are, you (authorities) are talking about transparency and all of this kind of thing, but you didn’t see it wise to meet with people to discuss the upgrade and also to find ways and means of helping them to find an alternative livelihood within Mayreau that they can benefit directly or indirectly from the resources around them; and it is very hard.”

He, however, expressed hope that the situation will be resolved soon, to be benefit of all concerned.

“I really that even from this point that the board, whoever, they meet with the people of Mayreau to discuss this whole issue, to address it so that in the end all side will be winners and the people of Mayreau will be able to benefit from the Tobago Cays and the resources that are around them,” Ollivierre said.

One reply on “Mayreau residents protest order to remove moorings”