In aftermath of deadly vehicular incident, NDP appeals for ‘calm and restraint’ 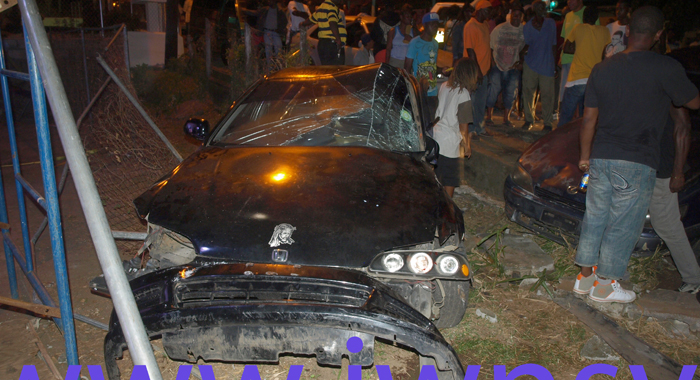 The vehicles after the incident in Clare Valley Saturday night. (IWN photo)

The main opposition New Democratic Party (NDP) has appealed for calm and restraint after one man died and several others were injured when a vehicle came into contact with persons at the party’s political meeting in Clare Valley Saturday night.

“Party Leader [and Leader of the Opposition] Mr Arnhim Eustace appeals for calm and restraint as all Vincentians await the results of a swift, thorough and transparent police investigation,” the NDP said in a statement on Sunday.

Cruickshank, a former South Leeward council member of the ruling Unity Labour Party, recently began campaigning with Member of Parliament for South Leeward, the NDP’s Nigel Stephenson who is seeking a second term in office.

The former ULP activist was attending his first political meeting with the NDP since throwing his support behind Stephenson, when he was injured and later died.

“The NDP extends condolences to the bereaved widow and family of Mr Cruickshank, and wishes a speedy and full recovery to all who suffered injury, physical and mental,” the party said in the statement.

“At about 10:30 p.m. on Sat. Dec 6 2014, at a New Democratic Party public meeting at the Clare Valley hard court, a black 4-door motor vehicle bearing registration number P7516 drove directly into the crowded meeting space, pinning five attendees under the parked motor vehicle on which they rested, as well as impacting at least five others.

“When the vehicle rested, passengers alighted and at least one person fled the scene and was apprehended by police, where he remains in custody,” the NDP said in its statement.

“Witnesses confirm the vehicle was heard to be revving before ploughing into the crowd; its headlights were turned off; and that the vehicle had driven past the public meeting twice before the incident.

“Ten injured persons, including a child, were taken to the Milton Cato Memorial Hospital by medical, police and private transportation. “Mr Edgar Cruickshank, who was among persons pinned underneath the car, succumbed to his injuries at the hospital, just past midnight, despite the efforts of medical personnel. Cruickshank had recently begun campaigning with NDP MP and Candidate Nigel Nature Stephenson in the South Leeward Constituency and his presence at the public meeting was acknowledged by Nigel who hailed it as a Clare Valley first,” the NDP said.

“The New Democratic Party leadership joins with those who question the circumstances giving rise to the national tragedy at Clare Valley,” the party said.

In a Facebook post on Sunday, Sen. Jomo Thomas, the ULP’s candidate for South Leeward in the next general elections, called for a thorough investigation of the incident.

“While I don’t have all the facts surrounding the incident of last evening at Clare Valley, the unfolding tragedy is horrible and unspeakable. It has brought death, pain and suffering to many. I express my total and complete condolence to the family of Mr Edgar Cruickshank. I also express sincerest sympathies to the families and love ones of those who were injured. In times like these, the pain and sorrow are not only shared, they are multiplied.

Nothing short of a thorough investigation into cause or causes of this incident will suffice,” Thomas wrote.

Cruickshank had expressed disappointment in Thomas emerging as the lead contender for the nod as the ULP’s South Leeward candidate in the next general elections, which must be held by March 28, 2016, but are widely expected by December 2015.

Cruickshank did not attend the constituency conference in July at which Grenville Williams, who Cruickshank supported for the post, nominated Thomas to be the candidate — seemingly with little magnanimity, notwithstanding his oral endorsement.

The fledgling Democratic Republican Party said in a statement on Sunday the incident that it regrets learning of Cruikshank’s death.

“We condemn any apparent attempt to interfere with the people’s inalienable rights and freedoms which are also constitutionally protected. Rights such as the Right to life (Section 2) and Freedoms such as the freedom of conscience (section 9), freedom of movement (section 12) and freedom of Assembly and Association (section 11),” DRP leader and founder Anesia Baptiste said in a statement.

“The DRP stands continually on the side of the Rule of Law as our color Blue represents and maintains that the Country needs revived principles of the heart as our symbol describes.

“To the family of Mr. Cruickshank and the injured and their families, we express our deepest, heartfelt sympathy to you and pray that your hearts be comforted in this difficult time,” said Baptiste, a former NDP senator who was fired in 2012.

“The DRP pledges continually and consistently service to all people with respect for their inalienable and inviolable rights and freedoms from this party with a heart. May God bless St. Vincent and the Grenadines,” Baptiste said.

13 replies on “In aftermath of deadly vehicular incident, NDP appeals for ‘calm and restraint’”