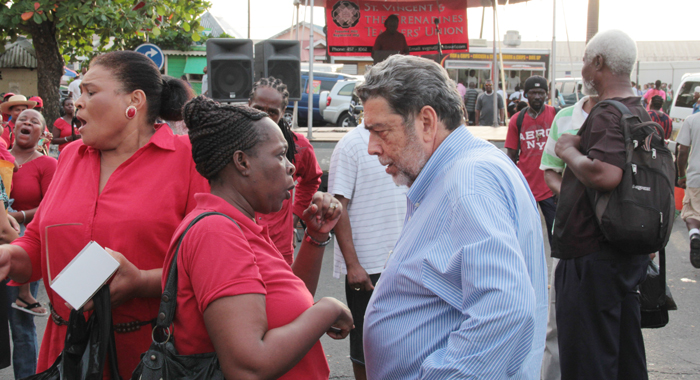 PM Gonsalves chats with teachers in Kingstown after their solidarity march in November. (IWN photo)

Members of the leadership of the Public Service Union and the SVG Teachers Union are slated to meet with Prime Minister and Minister of Finance Ralph Gonsalves today (Thursday), but the membership of the unions have not been told about the talks, a well-placed source has told I-Witness News.

The source told I-Witness News that the Office of the Prime Minister telephoned on Wednesday regarding the meeting.

“The membership is unaware and some executive members are peeved by the manner of contact and the short notice,” the usually reliable source told I-Witness News on Thursday.

“The agenda was not communicated, but at least one executive member thinks the meeting is about salaries and other terms and conditions of service. Salaries were frozen since 2011,” the source said.

“I know that this is heading for bacchanal,” the source further told I-Witness News.

The same source told I-Witness News last month that the two public sector workers unions had met to discuss wage demands that they plan to put to the government.

“However, the whole thing appears to be shrouded in secrecy. Only certain members of both executives were made aware of this meeting. I know that there is some discordance in the SVGTU because of the manner in which the thing was done,” the source told I-Witness News.

I-Witness News reached Robinson by telephone late last month, but he said he was overseas and was about to go to a meeting and unable to continue the call.

He requested that we contact him later that evening, but subsequent calls to his mobile phone went unanswered.

But Aubrey Burgin of the PSU told I-Witness News last month that the discussions between the PSU and the SVGTU were in relation to pension reform.

“Presently, we are discussing pension reform, so we will have a joint position on pension reform between the Teacher’s Union and the Public Service Union. Those discussions are relative to that,” Burgin told I-Witness News.

“We are going to put out a communiqué … on the issues that we are going to raise with respect to that. It hinges on the whole things of social security, which comes under the NIS and general pension reform, which we thing is necessary,” he further said.

“After the reclassification, we had a lot of anomalies in the Public Service in a number of the positions and those are some of the things that will be discussed in that whole framework, with regards to pensions.”

He said the anomalies were relative to positions “red circled positions”.

“When you say red circled positions, these are positions that are virtually stuck there. … There is virtually no movement in that position, no upward mobility,” Burgin told I-Witness News.