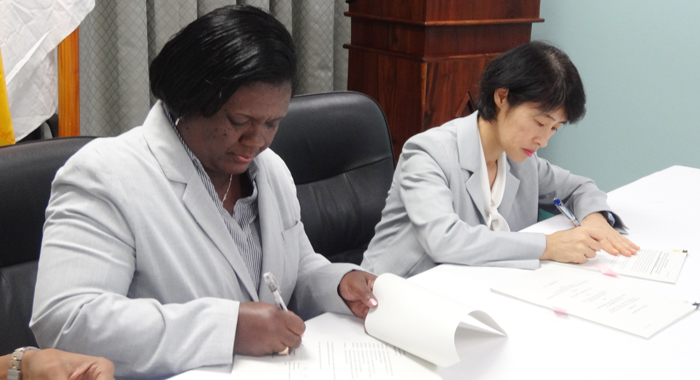 (API)– The governments of St. Vincent and the Grenadines (SVG) and Japan have signed a document that facilitated the transfer of approximately US$1 million to the National Emergency Management Organisation (NEMO).

The agreement, signed on Dec. 5, is a follow up to the Japan Aid Project that was signed in September between Prime Minister of SVG, Ralph Gonsalves, and Masatoshi Sato, Counsellor at the Embassy of Japan in Trinidad and Tobago.

In September a grant agreement of approximately US$6 million was signed between both countries at Cabinet Room to assist with damage caused by the December 2013 floods. Roughly US$1 million was allocated for the provision of industrial products to contribute to the promotion of the economic and social development efforts in SVG. The National Emergency Management Organisation (NEMO) made the request on behalf of the Government of SVG.

The additional US$5 million is expected to go towards equipment maintenance in the area of Fisheries.

Michelle Forbes, deputy director of NEMO and Tomoko Nikai of the International Cooperation System signed on behalf of the respective governments.