Collapse of the Windward Highway at Argyle 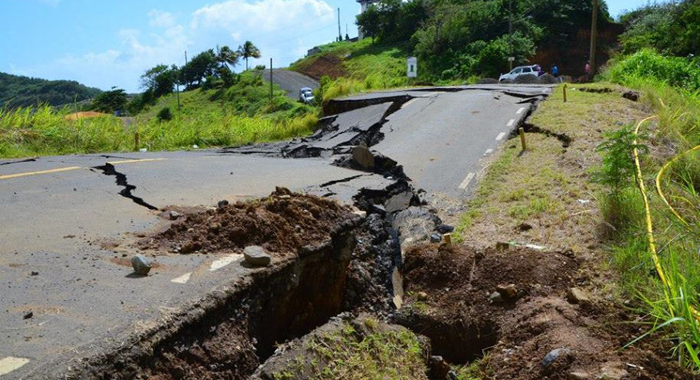 The section of the road in Argyle that collapse in November. (Photo: Lance Neverson/Facebook)

The main Windward Highway at Argyle airport started to collapse between Friday Nov. 21 and Sunday, Nov. 23,  and instead of embarrassing the ULP government, Senator Francis and PM Gonsalves brought a load of old long talk to try and convince us that is an act of God or an act of Nature.  It’s not, it’s the fault of this government and its limited liability airport company,  IADC.

The Argyle airport Bypass Road was the first important  cog in the construction of the airport.  It was constructed by C.O. Williams (COW) the contractors from Barbados.  They left SVG being owed several million dollars by the government for the bypass road, and are still waiting to be paid after 5 years.

This was confirmed by a C.O. Williams spokesperson, who told, “From our perspective, we are still owed a substantial amount of money, so that’s accurate”.

The Kingstown traders who still until this day are owed EC$60 million by the ULP government and are still waiting to be paid after up to 10 years later.

The 61 landowners who had their land taken for the airport by compulsory order by the ULP government, and are still waiting to be paid up to seven years later.

Now, what happened to the road is not the fault of the contractor, it’s the fault of the ULP Government Ministry of Roads and Bridges, the Planning Department and the airport company —  International Airport Development Company . I keep tabs on the ULP government; I keep tabs on IADC, a company that is completely owned by the government.  We must also remember that IADC is a limited liability company, if they eventually go broke and are unable to pay what they may owe, you may well never get paid at all.

The bypass road was carved through a hill, what was removed and used to fill  a gully area on the other side of the carved hill. It was part of this filled gulley area that has sunken, taking the new bypass road with it.

A number of things triggered the sinking and slippage. First, was the failure of the planners to provide for roadside drainage in that particular area.  Second, was the recent installation of a substantial road up to the new airport tower; the rain and storm water runoff of the tower and other  buildings on the tower hill and that road leading to them is immense. All that water drained into an area adjacent to  the bypass road on the airport side, where it was soaked up like a sponge in the filled land, undermining the road. Third,  the planners allowed the building of large  house on a steep slope opposite the control tower hill road.  That house created once again a rain and storm water runoff, this time to the opposite of the road. All that water drained into an area on the side of the road opposite the airport, an area which by recent actions was now inadequately drained, or not drained at all,  where it was soaked up like a sponge in the filled land, undermining the integrity of the  road.  But what made it eventually collapse was the fact that IADC removed a roadside hill on airport land (unpaid for land of course) adjacent to the road and created a cliff, which proved to be unstable because of water drainage from surrounding hills and countryside. The IADC also failed to install a retention wall when removing land adjacent to the road. Those failures affected the land slippage into the area in the airport being worked, and the loss of a large section of road.  If you stand on the runway and look at the excavated area and the substrata under the road, now fully exposed by excavation, it’s very obvious what happened, where the fill starts and finishes.

Now they have diverted the road through the garden a house nearby. They will probably never repair the road and the road will now be rerouted permanently through the garden of the house, making the house virtually worthless and blighted. Like everyone else, I doubt that the owner will ever be paid or compensated for the house and land. This, I am sure, will be another land grab, another case of governmental theft from a citizen.

And just a reminder that all those government built houses in Clare Valley to boost support for the ULP in the area are now, and will probably be for evermore, worthless and blighted.  The government just could not give a damn when it comes to other peoples money!

I remind you also about Bigger Bigs, who has been subjected to spite, hatred and pure evil because he changed his support to the ULP. His business and life has been destroyed and 60 worker sent to the rubbish heap because of the ULP policy of malice towards non-supporters.

The Unity Labour Party Government are floundering and struggling from one crisis to another. Almost daily something else goes wrong, it’s really time to dump them.

“Were these people told how the airport carries a curse and is now called the Christian Blood Airport [CBA].

Were they told that many of the people who owned land at the airport site have not been paid in the last three years.

Were they told that Gonsalves has been seeking money from rubbish states such as Iran who execute Iranian Christians, because they are Christians. They pay SVG money for the airport, then SVG in return votes for them in the UN, to protect them against charges of murdering Christians.If you in the Diaspora want to mingle your money with dirty blood money, so be it”.

It would appear that so far my predictions have come to pass on almost a daily basis. We must remember that any action by man that brings about tragic results cannot be fobbed off as being no one’s fault.   It it goes wrong and it was predictable, it was and is always,  someone’s fault.

One reply on “Collapse of the Windward Highway at Argyle”