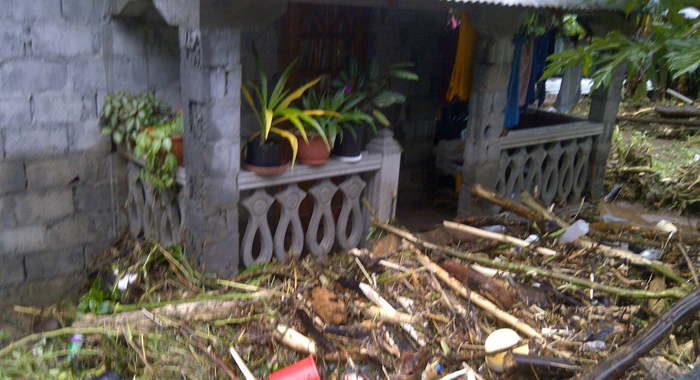 The Jefferys’ house in Spring Village on Christmas Day 2013, after the floods the previous night.

In his years in the club, the 26-year-old athlete has led a few missions to rescue the team from defeat.

But on Christmas Eve night 2013, Jeffrey was called upon to conduct a non-cricket-related rescue mission: he had to literally rescue of his mother, Rosita Jeffrey, from rising floodwaters.

“My brother called out [saying] that water was coming into the house, but I did not treat it as any big thing, since I knew that we a had a kitchen sink pipe that was giving some problems.

“But I got off the bed only for my feet to be ankle deep in water, and very soon it was up to my waist,” Jeffrey said as he recounted the early part of the 2013 Christmas Eve trough systems, which flooded out their home and score of others across the country, and left possibly 12 people dead, even as the Jeffreys narrowly escaped a more serious fate.

Nine persons have been confirmed dead and three are still missing and presumed dead.

The family survived through strength, the will to live, and sheer bravery, with Jeffrey playing an important and major part.

He said that prior to the alarm being sounded by his brother, he had somewhat noticed the smell of the nearby river to be a little “high”, but paid it no mind.

But upon leaving his room, where he was “doing some stuff” on his laptop, the level of the floodwaters has already risen with frightening speed, and mattresses were floating off beds, and other household pieces were floating as well.

“It was rising to the point that by the time I entered the room which was at the furthest point of the house away from the river, it had reached waist high,” the 6 feet 4 inches Jeffrey said.

He said that his 93-year-old grandmother, Icelyn Jeffrey, remained trapped in that room for some time until some relatives came to assist them by making it through the water, which, by this time, was “very heavy and moving a lot of stuff as it went along…

“When we went outside, the whole place was covered with water and debris, and the water was up to the porch and very strong. So I told my mum we have to get through that and we must get to the road, which was about 50 metres (150 feet) or so [away].

“It was very tricky as the place was dark and any slip could mean being carried away by the water,” Jeffrey explained.

The powerful Jeffrey has smashed many sixes into rivers adjoining playing fields, with balls landing with a ripple or a splash — as if angered by the series of telling blows that he had deposited as unwanted guests in oxbow lakes across St. Vincent, with the Cumberland River, according to reports, at it most vengeful.

“When I looked at the force of the water, it was frightening,” Jeffrey recounted.

“But I then told my mum to get onto my back and to hold me tight and I started off, picking my way across and moved diagonally to get to a spot I had identified.

“We went slowly and really carefully. There were times when the pull [of the water] was very strong but we made it,” he said, relief obvious on his face a full year later.

A few weeks after the incident, Jeffrey was representing Team Rivals at Arnos Vale 2 and was involved in another rescue, this time of the more familiar cricketing kind — belting a few more sixes, possibly with some level of satisfaction or foreboding into Great Head River.

He said that while he was able to return to the cricket field in quick time, it was a different case with his job at telecommunications provider, LIME.

“I just could not function at work. The thing just kept coming back to me and it was really scary, but the management reached out by giving me some time off and I gradually got over it.”

Jeffrey and his family returned to their home in September after spending some time with relatives. While the memories of the Christmas Eve 2013 ordeal are still vivid, he is taking heart from the fact that his family has been living in that area for more than 70 years and it was the first time such a thing had happened.

“My mum is 56 and she said it never happened before. And in my time, I can tell you we have a garden at the back of the house and sometimes when the river came down heavy, some water would run through there, but it never looked like coming up to the house,” he said.

Jeffrey said that when heavy rain falls, there is a tendency for him to think back of the floods, and that was the case a few weeks after the event.

“I think it was a Saturday or so just after the floods that we had some really heavy rains and you could not help being a little nervous. It is just human,” he said, as his readily available smile began to appear.

He is hoping that the government will speed up the process of dealing with the river defence following what he said was contribution from the Trinidad government to have this done.

Among those confirmed dead as a result of flash floods and landslides resulting from the trough system, are five members of the Nanton family in Rose Bank.

Yowanie Nanton/Bartholomew, 18; and Bernard Nanton, 24, died when their home collapsed under a landslide.

Additionally, 18-year-old Community College student, Keslia James and her 2-year-old niece, Canadian Shalarni Headley, who was visiting for Christmas, died in the floods in Cane Grove.

Desmond Wilson, 47, of Vermont died after being swept away by floodwaters in his village, and Raymond Gonsalves, 62, of Manning Village, Byera, died when a landslide crashed into his home.

In addition to claiming lives, the unseasonal rains caused extensive damage to houses, public infrastructure, agriculture and forestry, with the World Bank estimating the damage to be approximately US$100 million.

The “Christmas Eve Floods” came four days after the 45th anniversary of the “Federal Queen Disaster”, the worst sea tragedy in St. Vincent and the Grenadines.

The motor sloop, Federal Queen, which was transporting workers from the Grenadines to St. Vincent for the Christmas break, capsized and sank just after 10 p.m. on Dec. 20, 1968.

Authorities were unable to give a correct figure of the amount of lives lost since there was no passenger list. The Associated Press, however, reported that 63 persons died and 38 survived, but noted that authorities had said more persons may have been on board the vessel.

The Decemeber 2013 disaster also came four decades after the “Godsend episode” in North Windward, when residents of Sandy Bay consumed large amounts of aviation fuel, which had washed ashores from a stricken vessel.

Residents had believed that the fuel was alcohol. The result was that many died, while others suffered permanent blindness, among other side effects.

The fuel had been christened “Godsend” by residents, who felt that only God could have sent them so much “alcohol” for the Christmas season.

One reply on “In family’s darkest hour, Vincentian cricketer ‘backed’ his mom”