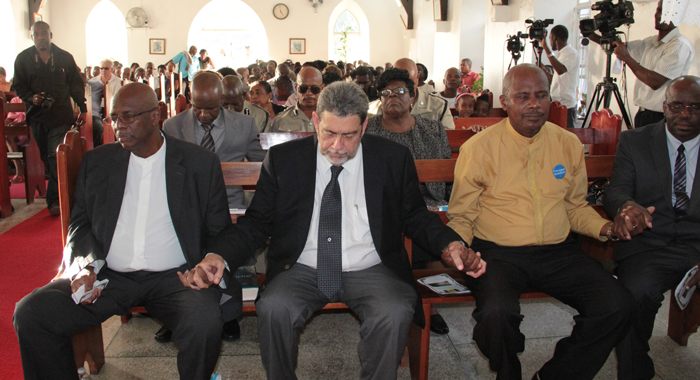 Prime Minister Ralph Gonsalves has appealed for Vincentians to live lovingly with each other.

“I want to ask, as part of the remembrance, … as we are going forward, those who are dead, I know we are still emotional about it, but we can’t help them. They are dead. But we can’t have a remembrance which is just formalistic — that we do it here in this nice church, and beautiful music, and good preaching and praying; we have to show our faith in deeds, because it is good deeds that faith is made perfect, made complete.

“And we have to live better with one another, we are not living good enough with one another,” he said Wednesday — Christmas Eve – at a national remembrance service for the lives lost as a result of the Christmas 2013 trough system.

Nine persons have been confirmed dead and three are missing a result of the extreme weather event.

“Arnhim and I, with our disagreements politically, and there will be differences, but he and I should live better with one another,” Gonsalves said to laughter and some applause at the service at St. Mary’s Anglican Church in Pembroke, where he sat next to Leader of the Opposition, Arnhim Eustace.

“’Cause it’s nice when we sing it, but we can do it, and I think today, while we are here — I know there is no communion or anything like that — I think that each of us should say at some time, ‘Lord we adore you, we love you, Lord, I confess my sins and I regret that I have trespassed against others. Forgive me.’

“We have to thank him for all the blessings and we have to reaffirm that we are in individual and collective supplication to him and he is king and that our nation is founded on the belief in the supremacy of God and the freedom and dignity of man,” Gonsalves said, echoing the preamble of the Constitution.

“If we move a little towards that, a little more, I think we can see a better Christmas and a better New Year, despite all the problems which we have in the world,” the Prime Minister said.

8 replies on “At memorial service, PM calls on Vincentians to live more lovingly”