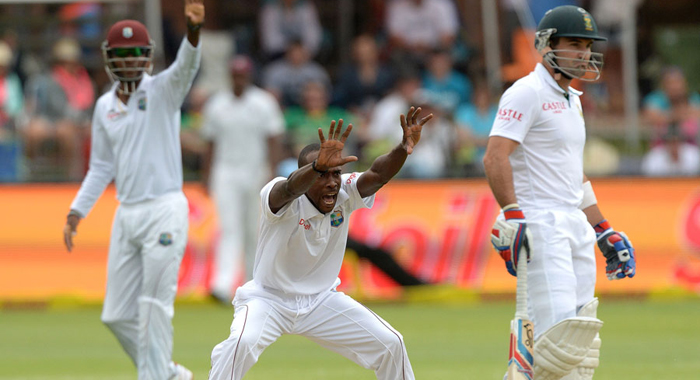 Vincentian West Indies cricketer Kenroy Keon Peters has described his Test debut as “a mixture of nerves and obviously excitement”.

“First I must thank God for this opportunity to play in a test match,” Peters further told this writer via social media on Thursday, hours after ending his first day as a test cricketer.

The 32-year-old Vincentian was making his debut in the second Test against world number one ranked South Africa at Port Elizabeth after being called up as a replacement for the injured Kemar Roach.

Prior to leaving St. Vincent and the Grenadines, Peters had indicated that his desire to make his Test debut was such that “jet lag or not I will be heading to the nets to make sure I create an impact”. (See video below)

And such was his impact that not only was he named in the final 11, but he was also given the new ball.

“I got the joyous news that I had been called up on Saturday last week and then I was told yesterday morning that I would open the bowling. That time put me in the frame of my mind to get myself ready and also prepare myself for the days’ play,” Peters told reporters in post first day’s play interview.

Kenroy Peters to share the new ball on Test debut

1.1: Peters to Petersen, 1 run, pitches it up to the right hander who nudges it to midwicket to get off the mark, around 125 kph from Peters that

1.2: Peters to Elgar, no run, good one, this is only 126.3 kph but it has kicked and straightened past the left-hander’s outside edge, who is left prodding at it off the back foot

1.3: Peters to Elgar, no run, 130 kph now from the debutant as he pitches it up, Elgar lunges forward this time and defends solidly

1.4: Peters to Elgar, 3 runs, still fuller and Elgar nicely squeezes it past the man at extra cover to pick up three, well run

1.5: Peters to Petersen, no run, good length, on off stump line, 126.5 kph, Petersen blocks easily from the crease

1.6: Peters to Petersen, no run, a shout for leg before here, but umpire Bowden is not interested. West Indies are, and Ramdin signals for the review after some discussion. Replays show that is pitching just outside leg stump, and that is a review gone early for West Indies.

Peters said it was a tough day and a steep learning curve on entering the test arena, adding that bigger efforts have to be put in to get rewards.

“At this level you see the difference in the level of quality batsmen and you have to work for your wickets. You just have to believe in yourself, because fewer mistakes are being made by the batsman, so bowlers had to work extra hard to get wickets.”

His debut came almost a decade and a half after most people thought he should have been given his chance, but, as in the I-Witness News interview ahead of his departure from SVG, Peters again made it plain that he never gave up on getting a call.

“I always believed that if I played first-class cricket and did well my chance would come,” he said, adding that he got the joyous news last week Saturday.

Peters had put himself back in the loop with a 40-wicket haul — the most by any bowler — in the 2014 regional first class season and continued in the 2014/15 season with a five-wicket haul against the Leewards.

And on Friday — Boxing Day — the slightly built Vincentian, who always appeared to be punching above his weight, with the first ball of his 13th over got his first Test wicket which was also captured in the ESPNCRICINFO commentaries:

Peters to Elgar, OUT, that is Peters’ maiden Test wicket, he has looked harmless with his pace but has stuck to his lines, Elgar did not need to play at this length ball, but went reaching for it, and it moved away slightly to take a thin edge behind, big partnership broken with under six overs to go for the second new ball- D Elgar c Ramdin b Peters 121 (330m 239b 18×4 0x6) SR: 50.62.

“It was a great feeling. When I saw the batsman nick the ball I was off celebrating and did not even wait on the umpire’s finger to go up,” Peters told this writer of his reaction on taking his first Test wicket.

He had earlier told reporters that he had dedicated the wicket to his seven-week-old son, Ethan.

Peters is looking towards day two with positive thoughts and says he recognises the need to be patient, promising to strive as much as possible to put the ball in the right areas.

He said he also knows that with his 33rd birthday just two months away he has to make the most of the late chance he has been offered, but is not putting himself under any unnecessary pressure.

He is the seventh Vincentian and fifth pace bowler to have represented the West Indies at the test level, following the path of the late Alfie Roberts (batsman) Michael Findlay (wicketkeeper) Winston Davis, Ian Allen, Cameron Cuffy and Nixon McLean.

Deighton Butler, another seamer, represented the West Indies in the ODI format.

In addition, two other Vincentians, Neil Williams (allrounder) and Wilf Slack (batsman), both played Test cricket for England, while allrounder Andre Adams, whose roots are in Bequia, represented New Zealand in a series of ODIs, including the 1999 Cricket World Cup in England.