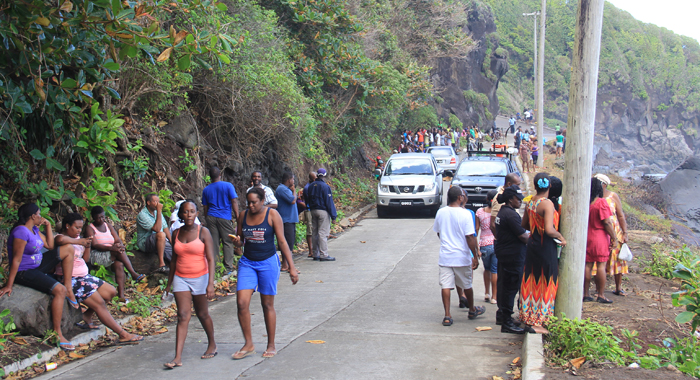 Five students died and two are missing and presumed dead as a result of the tragedy. (IWN photo)

The Ministry of Health on Monday described as inaccurate information being circulated that two survivors of the bus crash at Rock Gutter last week Monday have since died.

Five students died and two are missing at sea and presumed dead after a minivan carrying 21 passengers, including 14 students, plunged into the sea in north-eastern St. Vincent.

It has come to the Ministry’s attention that reports are being circulated on social media and other media that the driver and a child who have been hospitalized as a consequence of the accident are dead. This information is indeed inaccurate,” Neeka Anderson Isaacs, health communications officer in the Ministry of Health, Wellness and the Environment said in a statement.

“The Ministry of Health, Wellness and the Environment can confirm at this time that the three children who were ready for discharge are still in the care of the Milton Cato Memorial Hospital and are not in a critical condition,” she further said.

“The Ministry, therefore, urges persons to be a bit more sensitive and careful when relaying or posting unconfirmed reports as their actions, though well intended, are causing panic and distress to the families, loved ones and concerned citizens,” Anderson Isaacs said.

The Ministry said last week that three students were ready to be discharged but were being kept for further observation because they had expressed fears.

Anderson Isaacs said the ministry is urges citizens to desist from disseminating or posting incorrect and unconfirmed information, particularly as it relates to the loss of lives of victims of the tragic incident.