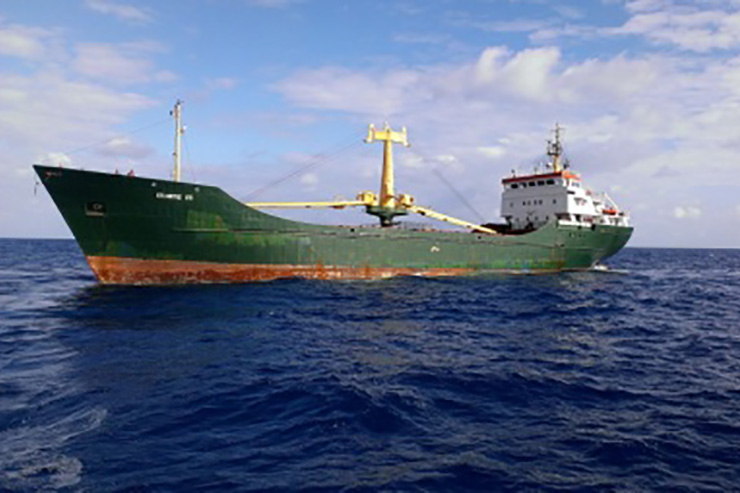 SAN JUAN, Puerto Rico, CMC — United States law enforcement authorities say they have seized 989 kilogrammes (2,176 lbs) of cocaine on a vessel carrying a St. Vincent and the Grenadines flag in the Caribbean Sea.

TheU.S. Coast Guard said it had collaborated with the U.S. Customs and Border Protection agency and U.S. Immigration and Customs Enforcement (ICE) Homeland Security Investigations in the exercise that also netted 13 men after detaining a delivery vessel and coastal freighter, about eight miles off the coast of Puerto Rico.

Two Venezuelan nationals were charged “with conspiracy to import the aforementioned cocaine shipment,” the Coast Guard said, adding that the cocaine has an estimated street value of US$29 million.

It said that the other suspects detained on the 267-foot St. Vincent and Grenadines flag coastal freighter Atlantic VII were from the Dominican Republic, Cuba, Peru, Panama and Ecuador. They were also charged with conspiracy to import a controlled substance into the United States.

The cocaine shipment, the detained smugglers, and the delivery vessel were transported to Coast Guard Sector San Juan, and transferred to ICE agents for further investigation, the Coast Guard said.

“Once again the combined efforts of federal law enforcement agencies resulted in the seizure of millions of dollars’ worth of narcotics. Our message continues to be the same: we will detect and interdict drug smugglers attempting to flood our island with their poisonous cargo,” said Rosa Emilia Rodríguez-Vélez, US Attorney for the District of Puerto Rico.

“These arrests are a clear indication of the continued success of the Caribbean Corridor Strike Force,” she added.