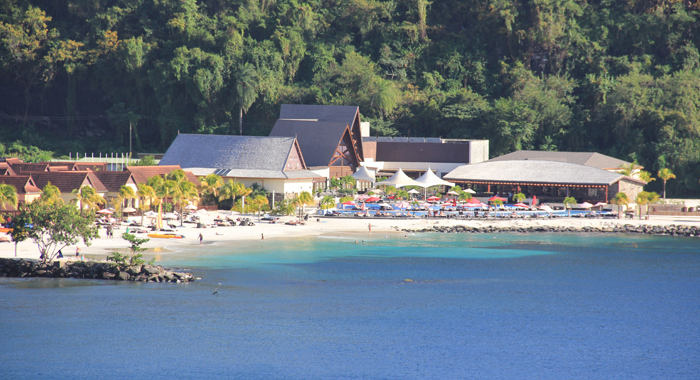 The Chamber of Industry and Commerce has noted the benefits of tourism to employment, the construction industry, the agricultural industry. (IWN photo)

The private sector has expressed concern about what it described as weak performance of the tourism sector in St. Vincent and the Grenadines, but welcomes the efforts to make financing more accessible to farmers.

Brian Glasgow, an accountant at accounting firm KPMG, told a Chamber of Industry and Commerce organised overview of the 2015 Budget this month that this was the feedback from industry stakeholders after the government outlined its fiscal package.

He said some homeowners are receiving concessions to expand their homes to accommodate medical students, and again mentioned the possibility of a large hotel being built at Mt Wynne on the leeward coast.

Glasgow said that some of the older members of the Chamber will recognise that for the past 30 years, successive governments have been talking about a large hotel at Mt. Wynne.

“So we hope that something materializes,” he said.

Giving the private sector perspective on the government’s proposals for the tourism industry, Glasgow said:

“We all recognise that tourism benefits employment, the construction industry, the agricultural industry, but I think — again from talking to players in the tourism industry — there is a lot of concern about our relative position in the regional tourism picture.

Glasgow spoke of a need for more dialogue between the government and the private sector on the future of the nation’s tourism product.

“Otherwise, we will not be able to continue to compete.

“And, with the eventual completion   of the Argyle International Airport, if we do not have the tourism plant to support an airport, we will have an airport that is unable to sustain itself from a cost-benefit perspective.”

The government has budgeted EC$4.6 million for agriculture modernisation and development, and a second EC$6 million tranche for the Farmers Support Company, a revolving loan initiative.

Glasgow said the perspectives of the private sector on these proposals were garnered through discussions with stakeholders.

“On the other hand, there are residual concerns in the private sector about the ability of small farmers, which we generally have in St. Vincent and the Grenadines … to compete with the large multinationals and the large plantations in Latin America. We don’t have the economies of scale and we don’t seems to be able to take advantage of the fact that we can sell our products as organic product, compared to the large farmers who tend to use a lot of pesticides and so on,” he told the gathering.

Regarding the banana industry, which is still struggling to recover from the ravages of Black Sigatoka, which ran amok amidst government inaction, Glasgow said:

“The anticipated resurgence in the banana industry is a lot slower than most people would like.

“For many decades, the banana sector has been the driving force of this economy and what we have now is really a shadow of what the bananas industry used to be. There is talk of revitalisation, but from discussions with the private sector, it seems that there is concern that the level of revitalization is not as aggressive as they will love.”

Glasgow also said, that manufacturing, as one of the pillars of the economy, “is not as robust as it should be”.

He said that apart from the efforts of the stalwarts who continue to persist in that sector, supplying the local market and have enter regional markets, “We do not seem to be breaking a lot of new ground in manufacturing.”

The private sector is pleased with the rehabilitation of the hydro plants in South Rivers and Richmond in 2014 after the Christmas Eve floods of 2013.

Glasgow said this is useful, because it reduces reliance on fossil fuel and the lower the fuel surcharge.

He said that government’s plans to develop a geothermal plant in the north of the country has been gaining a lot of support and the country, noting that the country has secured a US$15 million loan from the International Renewable Energy Agency to go towards the project.

Glasgow noted that SVG is 6th place regionally and 82nd globally in the ease of doing business ranking.

“Notwithstanding that, there are some areas is which the country is not necessarily competitive, regionally or globally, and these would include the ability to put a company into insolvency and so on. On the other hand, the country did receive a number of positives,” he said.