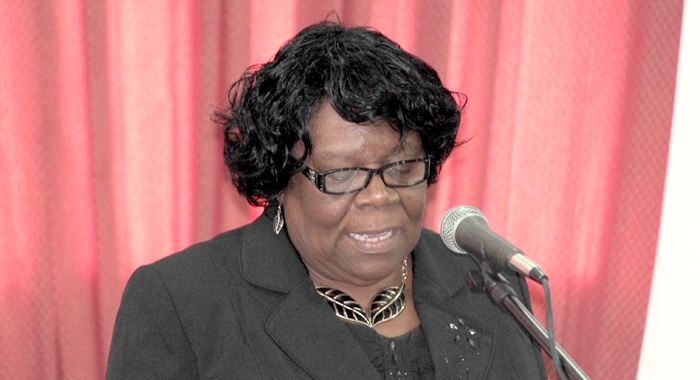 Minister of Education Girlyn Miguel says that school dropout figures published before the 2013/14 academic year did not accurately reflect the number of students who had actually stopped going to school.

“Previously, all persons exiting the system were classified as drop-outs, for reasons such as pregnancy, death, transfers, or migration. Hence, for the first time in 2013/14, figures obtained from the education statistical Digest 2013/14, which is available online — www.stats.gov.vc — states that the most significant reason for exiting the system was migration,” she told Parliament on Tuesday.

Miguel was responding to a question from Member of Parliament for the Southern Grenadines, Terrance Ollivierre, an opposition legislator.

Ollivierre said an analysis of the figures from the St. Vincent and the Grenadines Educational Statistical Digest 2013 shows that from 2009/2010 to 2013 academic years that 1,296 students dropped out at various levels from secondary school before completing their education.

He asked Miguel to say whether a study will be conducted to ascertain the reason(s) for school dropouts; the spatial distribution of school dropouts; and to identify the most vulnerable students in the country that are susceptible to dropping out of school.

Miguel said that from 2009 to 2014, the number of student exiting the cycle prior to graduation ranged between 0.2 per cent and 0.6 per cent.

She said that as of the 2013/14 academic year the data capture instrument was amended to provide more detailed information about why students drop out of the system.

“Of the 84 primary leavers, 69 were migrants. It is noteworthy that between 2009 and 2014 the number of pupils exiting the cycle prematurely was less than 100 of more than 13,000 enrolled,” Miguel told Parliament.

She spoke of the safety nets that are in place to help students in SVG.

“Mr. Speaker, our safety net is second to none in this region,” Miguel said.

She said that in examining both the primary and secondary cycles, “it is anticipated that there would be a greater attrition with higher levels of study, and the reasons for drop out at this level are currently under examination.

“In conclusion, it is inappropriate to sum up the leaver rate for the given years, as each represents a unique statistic for a given academic year. This is just erroneous as aggregating the given enrolment figures for the 2009/2010 and 2013/2014 period and stating that there are over 53,000 pupils and in excess of 40,000 pupils at the secondary level. Such data can be addressed for trends over the years but not aggregated,” she told lawmakers.

Miguel said that the Ministry of Education is a part of an on-going out of school study commissioned by the Education Management Development Unit of the Organisation of Eastern Caribbean States Commission.

“The objectives are to determine the reasons for the school dropouts and to design programme to retain and meet the students needs. However, the matter is sufficiently serious for the Ministry of Education and the Ministries of National Mobilisation and Health to partner and conduct a national study on the issue, with a view to reducing incidences of school dropouts by applying the mitigation measures indicated by the reasons discovered for the dropout out,” she said.

She told Parliament that education in SVG is guided by the philosophy that everyone can learn.

“As a result, we subscribe to Education for All Goals and the Millennium Development Goals. We know, Mr. Speaker, that it is not enough to have education for all, but that that education must be of a quality befitting the needs of the individual learner and all in our developing nation.”

She pointed out that students drop out of school for a variety of reasons.

“However, the problem can be addressed only marginally unless the parents and primary caregivers of the vulnerable students fulfil their parental obligations.

“Mr. Speaker, Honourable Members, one school drop out is one too many. Education is very serious business…” Miguel said.