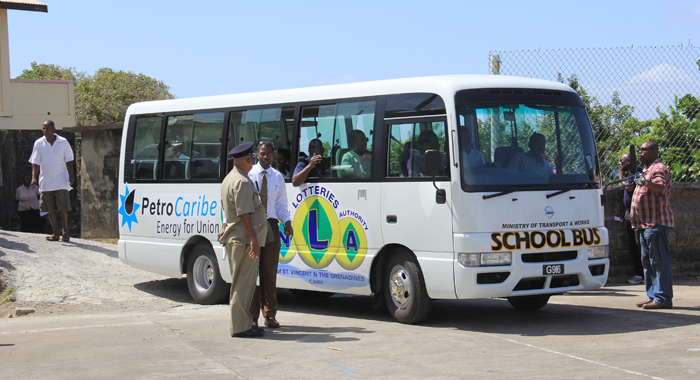 The government of St. Vincent and the Grenadines has commissioned a new, state-owned school bus to replace the privately-owned minivan that that was destroyed when it plunged into the sea at Rock Gutter in northeastern St. Vincent on Jan.12, resulting in the death of seven students.

The 30-seater vehicle will be used to transport students from Fancy to secondary school in Sandy Bay, Georgetown and North Union, further south in eastern St. Vincent.

The vehicle will be available to transport other residents of the North Windward community on excursions such as visits to Argyle International Airport construction site, Prime Minister Ralph Gonsalves said.

The school bus was purchased using an EC$100,000 donation from the Mustique Charitable Trust, EC$50,000 from PetroCaribe, and EC$50,000 from the National Lotteries Authority.

The dealer, Coreas Hazells Inc., gave an EC$15,000 discount, and the government paid for the licence and insurance.

At the ceremony in Fancy, Gonsalves responded to criticism that his government was only purchasing after the death of the seven students a school bus for the north windward community, where the terrains is primarily steep hills and deep valleys.

“… we were paying for a school bus to take the children. We were paying it. Now, when that bus went over at Rock Gutter, there was no bus here, so I had to buy one,” he said.

He pointed out that there are six school buses owned by the government, two of which are in the garage.

He said the government needs to keep a few big buses to transport students to camps and sporting events.

“But otherwise, we subsidize private buses,” he said, adding that operators who agree to transport mainly students at certain times of the day can receive 75 per cent duty-free concession on their buses.

Gonsalves said his government has bought the best bus for Fancy.

“That a tourism bus you know,” he said, noting that the bus has an intercom and is air-conditioned.

“Those who want to talk, let them talk. I am giving Fancy the best,” he said.

Lavinia Gunn, administrator of the Mustique Charitable Trust, said that the trust fast tracked its internal operations to respond quickly to the needs of the community after the tragedy.

“We hope that for the students in the Fancy area, this will provide meaningful and practical help,” she said of the bus.

Gunn added that the Trust replaced the uniforms, schoolbags, textbooks, and supplies for students in need after the Rock Gutter incident and also contributed to the transportation cost of the immediate family to visit the injured in hospital.

Funds for the bus came from the MCT’s affiliated trust, the UK Friends of the Mustique Charitable Trust. All the donations came from homeowners, renters and friends of Mustique, Gunn said.

Meanwhile, Malika Joseph, administrative officer at PetroCaribe, said that the decision to contribute to the purchase of the bus was an easy one for the company to make.

Member of Parliament for North Windward, Montgomery Daniel, said that the bus is the second purchased for the constituency since the Unity Labour Party came to office in 2001, the first of which was bought in 2002.

One reply on “New school bus commissioned in Fancy”