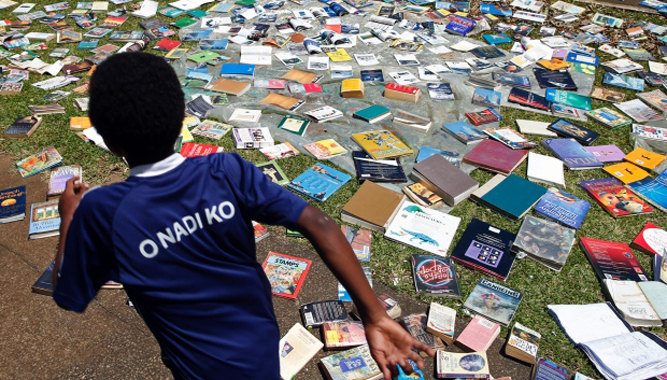 A boy runs past books drying in the sun on March 18, 2015 after the roof of the Central School library, in Port Vila, the capital city of Vanuatu, was blown away by Cyclone Pam. (Photo: Edgar Su/Reuters)

PORT VILA, Vanuatu — Digicel on Tuesday officially launched an appeal for donations to collect much-needed funds to assist with the relief efforts in cyclone-ravaged Vanuatu.

Partnering with Save the Children Australia, Digicel is collecting funds via SMS and online.

Vanuatu was hit by a category 5 cyclone in the early hours of Saturday. With winds of up to 340 km per hour, the cyclone caused mass destruction and devastation across much of Vanuatu, especially in the outlying islands.

Save the Children is working around the clock to provide food, water, shelter and other basic necessities to the most vulnerable communities – and all monies donated will go towards these efforts.

Promoted primarily on social media, the telecommunications provider is urging customers to stand #TogetherForVanuatu and to donate to Save the Children’s Cyclone Pam appeal by either texting to donate or donating online.

“The scale of devastation is significant, there is a real need for assistance and funding now to help the people of Vanuatu get back on their feet as soon as possible,” said Digicel Asia Pacific CEO, Michael Murphy.

Save the Children has a large presence on the ground and has been working in Vanuatu for almost 30 years. Donations will go towards providing much-needed clean water, food and shelter as well as rehabilitating schools in affected communities.

“Many houses were literally flattened and families have lost everything,” he added.

Save the Children Australia CEO, Paul Ronalds, said; “Cyclone Pam has devastated Vanuatu, affecting more than 150,000 people, including 75,000 children. Contributions to Save the Children’s Cyclone Pam appeal will help provide life-saving food and water for communities worst affected, as well as shelter, psychosocial support for children and the rehabilitation of schools to get them back up and running as soon as possible. Digicel’s support for this appeal is greatly appreciated.”

The social media promotion calls for support by asking people take a picture or video of them bringing their hands together, cupped around their face to show that they are #TogetherForVanuatu and giving a helping hand. The images or videos should be posted to social media and the person posting then nominates two friends to do the same and donate to Save the Children.