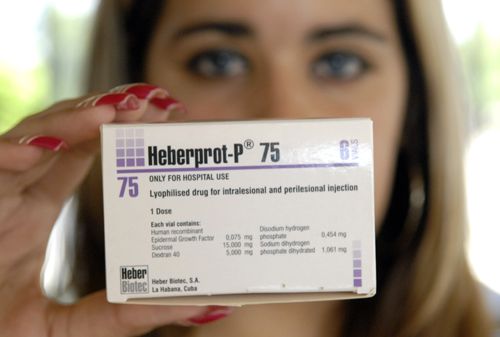 Heberprot-P has been effective in healing foot ulcers in 80 per cent of persons unresponsive to other medications.

Stakeholders from the Ministry of Health, Wellness and the Environment met with a Cuban delegation this week to introduce Heberprot-P, a product to stimulate the healing of diabetic foot ulcers.

In attendance were Permanent Secretary in the Ministry of Health, Wellness and the Environment, Luis deShong, Cuban Ambassador to St. Vincent and the Grenadines Luis Castillo Campos, and, among others, Chief Medical Officer, Simone Keizer-Beache.

There were presentations by local doctor, Rosmond Adams and Cuban specialist in angiology and vascular surgery, Eberto Carrazana Peinada.

Adams said that 1,725 persons with diabetes were registered in 2013 with 98 per cent new cases recorded in that same period.

Belair had the highest count of Diabetes cases, roughly 150.

Adams said diabetes was the third leading cause of death in St. Vincent and the Grenadines from 2009-2013.

In a 2014 study, persons with diabetes complications accounted for 975 admissions at the Milton Cato Memorial Hospital, with hospitalization averaging eight days. Fifty-five males and 72 females had episodes related to care for diabetic foot.

Diabetic foot is also a concern in Cuba physician Eberto Carrazana Peinada said during his presentation on the Cuban view of diabetic foot and treatment with Heberprot-P.

Eberto presented several success stories of patients in Cuba who had varying stages of foot ulcers, including how to administer the drug and side effects.

At the end of the two presentations, health stakeholders had several questions on the use of Heberprot-P. The main questions surrounded the precise administration of the drug and the results.

The Cuban delegation will also visit community health centers and the Milton Cato Memorial Hospital. The delegation departs on April 1.