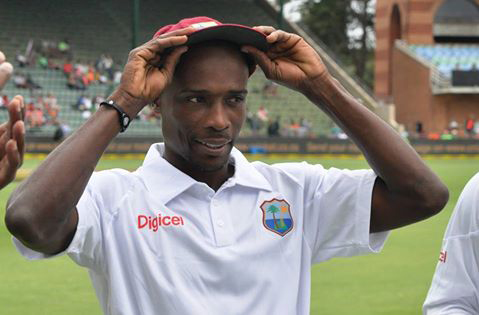 The decision by the Windward Islands tour selectors to omit Kenroy Peters from their final 11 for a number of matches this season appears to have put paid to him playing more than a solitary test match for the West Indies.

This appears to be the case after the West Indies Cricket Board announced a 20-member West Indies squad for a training camp in Antigua ahead of the International Home Test Series against England, starting next month, minus Peters.

A release from the WICB noted that all but seven of the players selected were part of the squad that played in the previous Test series against South Africa this past December/January.

The release said that TnT’s left-handed batsman Darren Bravo has recovered from the injury that ended his participation at the ICC Cricket World Cup 2015 early.

But Peters was completely overlooked despite once again being among the leading wicket-takers this season with 37 @ 14.16 apeice.

Peters, 33, was called up by the regional selectors as a replacement for the injured Kemar Roache on the tour to South Africa last December. He played one test, and, according to reports, performed creditably well, taking 2/68 in his only bowl even as some pundits questioned his lack of pace. He was dropped for the next match when, many, including former West Indies speedster now commentator, Ian Bishop, thought he had done enough to merit a second test.

However, returning to the Caribbean at the end of the tour with publicly-expressed aspirations of getting back into the team, the Vincentian pacer was promptly dropped by the Windwards selectors for the Nagicor Super50 in Trinidad.

His humiliation did not end there, for, despite being the team’s leading wicket-taker and coming off a Man of the Match performance in Trinidad against the Red Force, Peters found himself carrying the drinks the following match at the Kensington Oval. His season came to an inauspicious close when he was recalled for the spin bias pitch in Dominica, where his 25.2 overs saw him taking 1/67 and was guilty of overstepping the front crease on a few occasions.

Last year, Peters collected 40 wickets to be the leading wicket-taker in the competition, resulting in his call up which many thought should have come more than a decade before.

While Peters’ attempts to regain his West Indies place appeared to have been stymied by persons from within his own team, it was the opposite for Dominica’s offspinner, Shane Shillingford.

Shillingford, who despite looking well below his best for a major part of the season, was retained even at the expense of left-arm spinner Alston Bobb, who was seen by commentators to be the team’s best spin arsenal. Bobb ended in seven matches with 31 wickets @ 21.48, while Shillingford got 36 wickets in eight matches @26.25 apiece.

But Shillingford, even with all the apparent “favourite spinner status” bestowed upon him by the Windwards tour committee, still found no such favour with the West Indies selectors as he was not among any of the three slow bowlers named in the 20-man squad.

The training camp will begin on April 5 and culminate with preparation for the first Test, starting on April 13, at the Vivian Richards Cricket Ground, the release said.