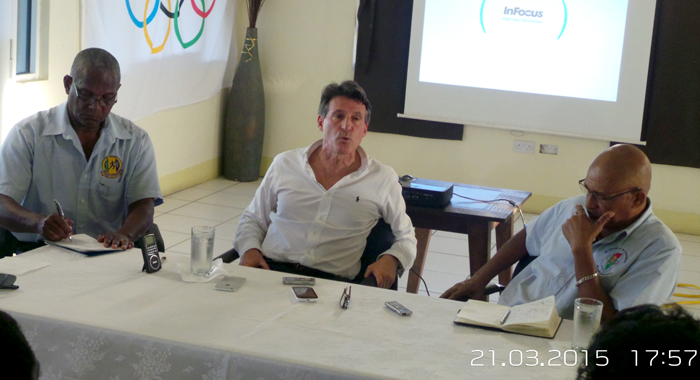 Track and field in St. Vincent and the Grenadines can be expected to improve by leaps and bounds once Briton Lord Sebastian Coe is elected president of the International Association of Athletics Federation (IAAF).

Diack, 82, from Senegal was first elected to athletics top post in 1999 despite being caught up in a series of bribery scandals six years prior. His imminent departure has seen the two legendary   athletes, Coe, a middle distance runner, and Bubka, a pole vaulter, announcing their candidacy.

Last weekend, St. Vincent and the Grenadines by way of the local track and field body Team Athletics SVG (TASVG) and the National Olympic Committee (NOC) hosted Coe, offering him a platform to enunciate his vision for the future under his theme “Growing athletics in a new age”.

“Development sits at the heart of my vision. I want to create a development structure that is much more aware of what is taking place on the ground,” he said.

He pointed out that the IAAF can be strong only by strengthening the member associations and doing so in partnerships.

“The number one objective is to enable federations to deliver more effectively and for the IAAF to really support their programmes since they know better than we do what is going to attract the young people.”

He also said that it was imperative that more competitions are introduced so athletes can measure their progress against better opposition.

“I want to create more competitions. If we are not about competitions and coaching then we are probably not much else. We need to have more head to heads,” he said.

With regards to SVG, Coe pointed out that this country is only one of a few countries in the IAAF family that does not have a synthetic track and he has thrown out an idea how this matter can be addressed.

“There are ten member countries where there is not a synthetic track and St. Vincent is one of those countries. But an application can be made to the International Athletics Foundation (IAF) seeking assistance as to how to get a track for St. Vincent.”

He said once the application and proposal is submitted there is an initial grant of US$200,000 and this can be as much as double that depending on the requirements. He however pointed out that it is better for this effort to be a government/track and field collaboration to avoid problems with site, etc.

Coe said that parties here should try to ensure that the proposal reaches the IAF before its November meeting in Monaco.

SVG had made several “grand charges” over the years to get a synthetic track with even representatives from world renowned track supplier Mondo contacted by the IOC to visit SVG, but this attempt was still born.

Another area where SVG may see some positives under a Coe administration is having more grant monies at its disposal with his stated intention to increase the amount to US$25,000, up from US$15,000. He pointed out that the proposed increase was initially US$20,000, but owing to “shrinking funds” it was reduced to US$15,000.

He said that this money will only go to federation who needs it most and not “a one size fits all” approach.

Coe, who was expected in SVG Saturday morning, arrived around 3 p.m. after reports say he missed his flight out of Trinidad.

During his brief visit here, he was able to meet with TASVG and the NOC as well as government officials and the media.

Reports say both Coe and Bubka will address the CARIFTA Games Congress in St. Kitts next Monday in a bid to win regional support.

The IAAF Congress in Beijing takes place from Aug. 18, where either Coe or Sergey Bubka will take the reigns as Diack’s successor as IAAF President.