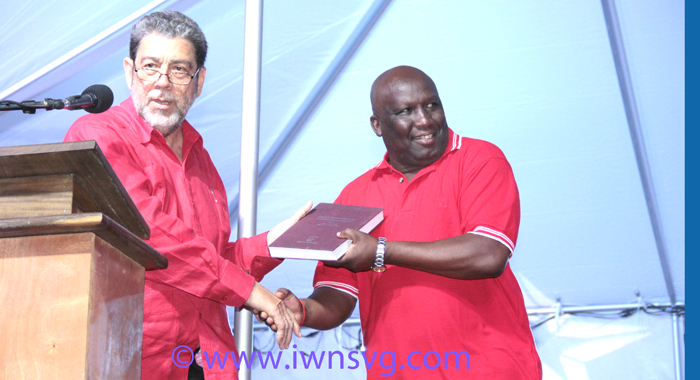 PM Dr. Ralph Gonsalves presents a book to Jimmy Prince, who is tipped to be the ULP’s candidate in Marriaqua. (IWN photo)

Kirk Da Silva and Godson Cain, who the Unity Labour Party says have agreed to withdraw their bid to be the party’s candidate in Marriaqua in the next general election, were not among the party’s candidate and prospective candidates who received books from Prime Minister Ralph Gonsalves on Saturday.

“Tonight, I want to recognise everyone, those in the leadership and those of our members and supporters, all the people of St. Vincent and the Grenadines who have helped us to be here fourteen years later as the government,” Gonsalves said at a rally to celebrate 14 years since the party was elected to office. (Scroll for video)

“For each person named, I have gifts. From my library, I have taken 36 books. And I have signed each in appreciation…” Gonsalves said.

While Da Silva and Cain did not receive any books, Gonsalves had a volume, “CARICOM: Policy Options for International Engagement”, for Jimmy Prince, who is tipped to be the ULP’s candidate in Marriaqua.

“I want comrades to understand our regional integration movement and how it connects internationally,” Gonsalves said as Prince received the gift.

The political leader of the ULP also sent a book for Dunstan Johnson, who failed in his bid to become the ULP’s candidate for Central Leeward.

The ULP says Johnson and current Central Leeward MP, Minister of National Reconciliation Maxwell Charles, agreed to give way to Louis Straker, who represented Central Leeward from 1994 to 2010, who the party called out of retirement amidst a deadlock among supporters of Charles and Johnson.

Gonsalves also gave two books to Sen. Jomo Thomas, the ULP’s candidate for South Leeward, and a book each to Grenville Williams, and former South Leeward candidate, David Browne, who both gave way for Thomas to become the candidate.

He sent a book for Conrad Sayers, who won in Central Kingstown in 2001 and 2005, and is said to be now visually impaired.

He also gave two books which he published recently — “Our Caribbean Civilisation and its Prospects” and the “The Case for Caribbean Reparatory justice” — to Jordan Hamlett.

Jordan is son of Michael Hamlett, who was the ULP’s candidate in East Kingstown in 2001, but died some months after that election.

Debbie Charles and Beresford Phillips, who are tipped to be the ULP’s candidates in West and Central Kingstown, also received books.

“Comrades, that is the best way I can think, in a tangible way to say thanks to all those comrades who have helped us in this journey, and we have a journey to continue in the next election, between now and end of March next year,” Gonsalves said.