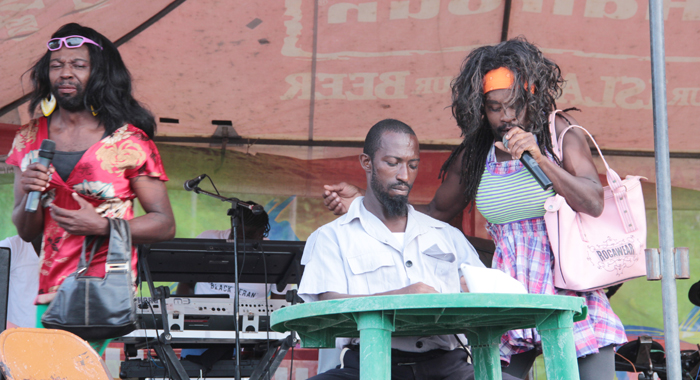 Maxwell “Tajoe” Francis, left, and other persons put on a skit in Fancy on National Hero’s Day. (IWN photo)

The organiser of the National Hero’s Day celebration in Fancy say they will refocus their attention on the cultural package to ensure that it lives up to what visitors to the community have come to expect over the year.

Activity co-ordinator of Fancy Unity Farmers Corp. and the North Windward Tourism Association –Fancy Chapter, Maxwell “Tajoe” Francis, told I-Witness News that one of the problems that organisers have been having is that the cultural package that people come to Fancy to expect is “not up to scratch the way I would want it to be”.

He said a number of factors contribute, including the fact that one of the teachers who use to assist him now teaches in Kingstown and he also teaches outside of Fancy.

Francis said that as children go to secondary school, they become more self-aware and tend to think that they should not be on stage.

“But I definitely am going to be working on that next year, because I want to get the cultural package back where it used to be,” he told I-Witness News of the March 14 celebrations.

Francis said that this year’s Hero’s Day celebration in Fancy was really successful, notwithstanding the challenges.

He said he thinks that by now everyone in St. Vincent and the Grenadines “knows that Fancy is the place to be for National Hero’s Day”.

“I think that over the past eleven years the activity has grown tremendously, especially with the coming on board of the Hairoun Brewery and Lime,” he said of the main sponsors.

He pointed out that the celebration is not merely an important cultural event in the community, the northernmost in eastern St. Vincent.

“It’s an event that the people of fancy especially look forward to, because on that day, it brings some very well-needed economics to the people of Fancy, because everybody is involved in terms of providing for the massive crowd of people that comes to Fancy. They are able to prepare not just food but the indigenous dishes more so, which is what a lot of persons look forward to when they come to Fancy,” he said.

“Our organisation is basically about the preservation of the indigenous dishes and the culture and, at the same time, finding ways and means of providing employment, especially through activities like those,” Francis said.

He told I-Witness News that while the activity has been a success over the years, it was especially successful this year, because the police did “an excellent job” in regulating the traffic and keeping vendors not resident in Fancy outside of the main activity area.

Francis said that while a large number of persons visited Fancy on Hero’s Day he believes that the turnout would have been even larger if they didn’t have to compete with a concert in Kingstown featuring Jamaican artiste, Shaggy, as the main act.

“It’s not easy to compete against an international performing artiste on that same day in terms of getting persons to Fancy and back to Kingstown. I think that took away a little bit, but I think the normal number of person who, on average would come to Fancy, came to Fancy.

“So I was very pleased. I think it was successful, just like all the years, even though we didn’t have that massive, massive crowd, but I think overall it was really, really good,” he said.

Francis told I-Witness News that he doesn’t believe that the Rock Gutter tragedy, in which seven students died in January when a bus plunged down a cliff and into the sea, dissuaded persons from visiting Fancy on Hero’s Day.

“Since the Rock Gutter tragedy, we have had more people up here who came for the funeral. I don’t think that was a factor, I don’t think that impacted it much. I believe it was the number of activities that was taking place elsewhere throughout the country and competing against the Shaggy concert probably was one of the factors,” he said.

He said that while LIME and St. Vincent Brewery have been consistent in their sponsorship, the activity can benefit from other corporate contributions.

“When you have a cultural package, you want variety. You want a whole mixture, you want all the authentic things that make up our culture, but you can’t do that because to travel to Fancy, the distance, the transportation cost to hire vehicles to transport groups and artistes is very expensive.

“In that area we really need to see some improvement in terms of sponsorship coming forward to help to carry the event. The people look forward to this event; this event has been probably one of the biggest events on the local calendar after Carnival. I think really and truly we need all the support we can get to really build it,” Francis told I-Witness News.