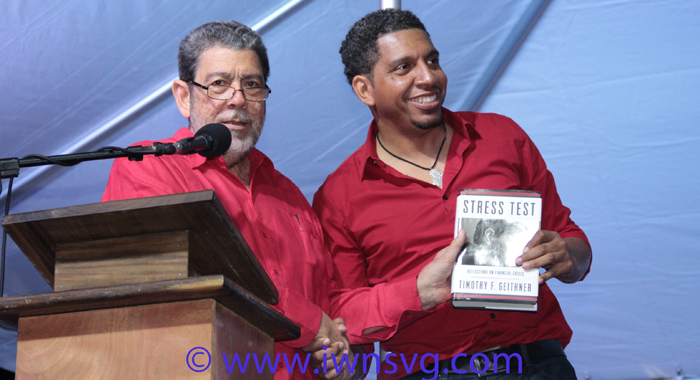 Sen. Gonsalves, who is the Prime Minister’s son and the ULP’s candidate in East St. George in the next general election, expressed the opinion in Calliaqua at a rally in celebration of the party’s 14th anniversary in office. (Scroll for video report on celebrations)

“Comrades, we know now what we only suspected in 2001. We know now that we have the best prime minister in the entire Caribbean — Ralph Gonsalves. That is a fact,” he said.

“And the people of St. Vincent and the Grenadines know that every individual one of you can also call Comrade Ralph.”

Vincentians are widely expected to go to the polls to elect a new government this year, although general election is not constitutionally due until March 2016.

Sen. Gonsalves said that in many ways, electors will be faced with the same choice as in 2001, when the ULP was first voted into office: the leadership of Gonsalves or Leader of the Opposition Arnhim Eustace.

“Imagine that a flood has washed away your house because of a natural disaster and imagine there are two doors in front of you, one says ‘Ralph’ and one says ‘Arnhim’. Which door you going to knock on? Imagine your child or you need a scholarship to study overseas and one door says ‘Arnhim’ and one door says ‘Ralph’, which door will you knock on,” said Sen. Gonsalves, a political newcomer.

“Imagine there is an economic crisis around the world and you are afraid that you are going to lose your job or you need a job. You’re going to knock on the ‘Arnhim’ door or the ‘Ralph Gonsalves’ door?

“Imagine you just want to talk to somebody, to reason with them, to sit down at the rum shop and lime. Which door you going to knock on? ‘Arnhim Eustace’ or ‘Ralph Gonsalves’?”

Sen. Gonsalves said that on the question of the international airport at Argyle, Gonsalves and the ULP said “yes”, while Eustace said “Find it (financing) where?”

The EC$700 million airport has missed several completion deadlines since 2011 and is now slated to become operational this October.

The senator said that on universal education, Gonsalves and the ULP said “now”, Eustace said “Well leh we think about that again in 2020”.

He went on to contrast the responses of Gonsalves and Eustace after the Christmas Eve floods of December 2013.

“This is the difference in leadership,” he said, adding that while Gonsalves embraced the Venezuela-led ALBA, Eustace said it will un-sign ALBA’s energy initiative, PetroCaribe.

“These are the differences you have to think about and this is why you have to pat yourself on the back for voting the ULP for all those terms in office, because you did a good thing. This country would have been worst off if you had made the other decision,” Sen. Gonsalves said.

“On the uplipftment of women, Arnhim Eustace says get out of their way, leave them alone, and let them fend for themselves. And this government says no, there has been discrimination historically against women, we have to do affirmative action to give them a helping hand.”

Eustace, at his “New Democratic Party’s Conversation” with Women last week said that the successive ULP administrations have “actively set back the women’s agenda” in SVG as he outlined 10 ways in which an NDP administration would “get out of women’s way”.

“I mean by this, that a responsible government recognises that it cannot give women empowerment. For none empowers a woman but herself. It is the role of government, and men too, not to stand in the way of women’s empowerment,” Eustace said.

“… I want to say that we have an important choice coming before us next election. We are either going to consolidate all the good work of the Unity Labour Party or we are going to undo it and throw it away,” Sen. Gonsalves said.

“If the ULP has touched your life in a positive way, and I know it has, you cannot throw away the Unity Labour Party in the next election. We have to put us back with a stronger majority than ever before. I want to see us bringing back what they accidentally took away. I want back North Leeward. I want back South Leeward, I want East Kingstown and Central Kingstown and West Kingstown. And I hear a talk about the Southern Grenadines; I feel I want that one too,” he said.

The ULP is seeking a fourth term in office amidst declining fortunes each successive election, including the lost of four seats in Parliament in the 2010 elections, when it was returned to power by a one-seat majority.

He spoke of the Bible story of Moses and the Israelite and how their grumblings resulted in their being in the desert for an additional 40 more years before they entered the Promised Land.