Gonsalves: ULP should be assured of election victory, but… 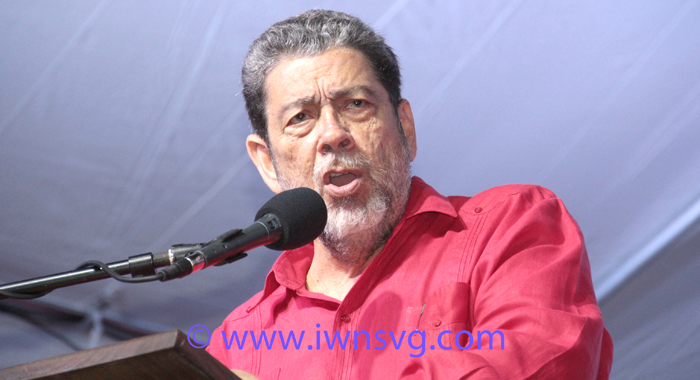 Prime Minister Ralph Gonsalves says that his Unity Labour Party should be assured of a fourth consecutive term in office, but he is mindful of what happened when the Jews had to choose between Jesus Christ and Barabbas.

“For the all the things which we are doing, this government should be completely assured of re-election, overwhelmingly. But we can’t take it for granted,” he said Monday at an event in Caratal, Georgetown, where the government gave six houses to persons who lost their homes in the December 2013 severe weather event.

“I never forget that on a Sunday, which he know as Palm Sunday, our saviour, Jesus Christ, walking from Galilee to Jerusalem, a large crowd turned out. They had palms, they throw it on the ground, the Messiah has arrived…” Gonsalves said.

“That is Sunday, then you had Monday, then you had Tuesday, then you had Wednesday, Thursday evening going in to Friday morning. And then Pontius Pilate, under pressure, went to the multitude, as is the custom, the Roman governor in the Jewish city, and asked, ‘Who you want me to release, Jesus Christ or Barabbas?” Gonsalves said.

“So you, don’t take for granted that you get the support; you’ve got to mobilise,” he said, adding that this mean that the young people have got to go and register and go and vote.

“And you can’t stay home and leave, metaphorically Barabbas party to have the day, because, you do that, there will be weeping and gnashing of teeth in St. Vincent and the Grenadines,” Gonsalves said.

General elections are widely expected this year, ahead of the March 2016 constitutional deadline.

The ULP will be seeking a fourth consecutive term in office, amidst a declining number of popular votes in the two elections since it came to office in 2001.

The party secured a third term in office in 2010, holding on to power by a one-seat majority: eight seats, as opposed to the seven captured by the main opposition New Democratic Party.

13 replies on “Gonsalves: ULP should be assured of election victory, but…”